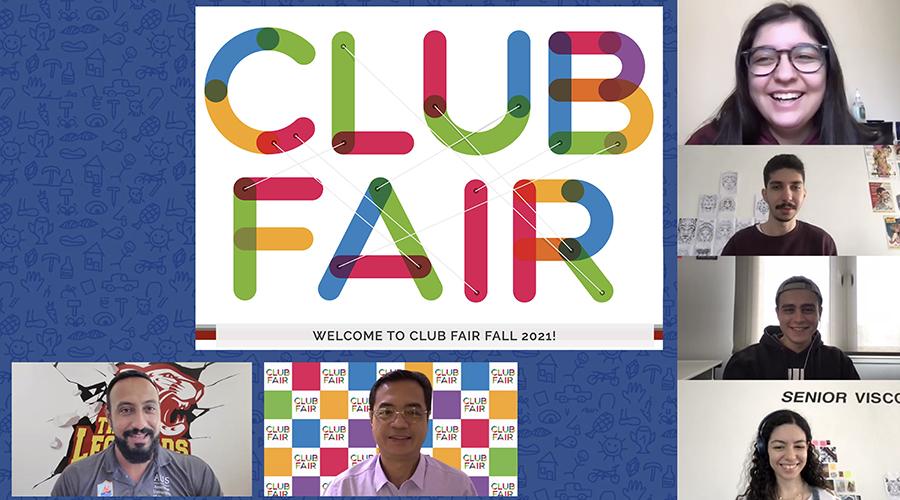 Organized by the Office of Student Affairs (OSA), the two-day event showcased 74 student clubs and organizations, the AUS Student Council, and eight departments from the Office of Student Affairs (OSA) including Community Service and Outreach, On-Campus Student Employment, Student Leadership Program, Student Athletics and Recreation, and Student Residential Life Department and others. An Information and Membership Desk was also available to answer students’ questions. A highlight of the event was the new OSA podcast, Tea with Gen Z, which discussed popular topics, advice for Gen Z and put a spotlight on youth talent. Students could also participate in the 49 virtual activities held by the various clubs and organizations.

Joining student clubs and organizations has made a major difference in the life of Ahmed Elmeligy, a computer engineering major in his final year at AUS. Throughout his years at AUS, he joined a number of student organizations and clubs including the Physics Club, where he became treasurer; and the AUS branch of IEEE Sight (Special Interest Group on Humanitarian Technology), where he started as a student officer then computer and science representative and later became vice president. He also became president of the IEEE main chapter. Today he is the president of the Engineering Honor Society and a member of the AUS weightlifting team.

“When I first came to Sharjah to study at AUS, I moved to the dorms and did not know anyone. But that changed after I joined student clubs. I met people who had similar interests to mine and I felt I was part of a community. I forged strong friendships and bonds with people who became like family. In fact, my social network was built by people I met through extracurricular activities,” said Elmeligy.

He added that his experiences with clubs and student organizations also honed his soft skills. “I learned how to work with people and how to implement projects and organize events. I learned about communication and coordination and how to be a team player.”

Elmeligy also made use of the many volunteering opportunities offered at AUS. He was part of an initiative to teach orphans and underprivileged adults the basics of physics, programming and applications of microcontrollers.

“This was an enriching experience at the personal level, and the project also received an honorable mention on the IEEE Sight global website,” he said.

For mathematics major Dania Dallah, the Math Club represented a place where she could further strengthen her math skills. Soon, she discovered that it was also a community where she made social connections, established friendships and refined her leadership skills.

“If you are first-year student, I really encourage you to visit Club Fair and join clubs that you enjoy. This will help you meet new people, and even form bonds that last a lifetime. You will grow on so many levels and be part of a community that embraces you,” said Dallah, who is now the Math Club President.

Dr. Moscaritolo said: “Clubs and student organizations at AUS benefit students by helping them find a community with similar interest.  During Club Fair, students got a chance to have one-on-one interactions with organization members and OSA units to understand how to get involved on campus.  Thank you to all the clubs and organizations that were part of Club Fair this semester for your hard work and dedication that contributed to the success of the event.”