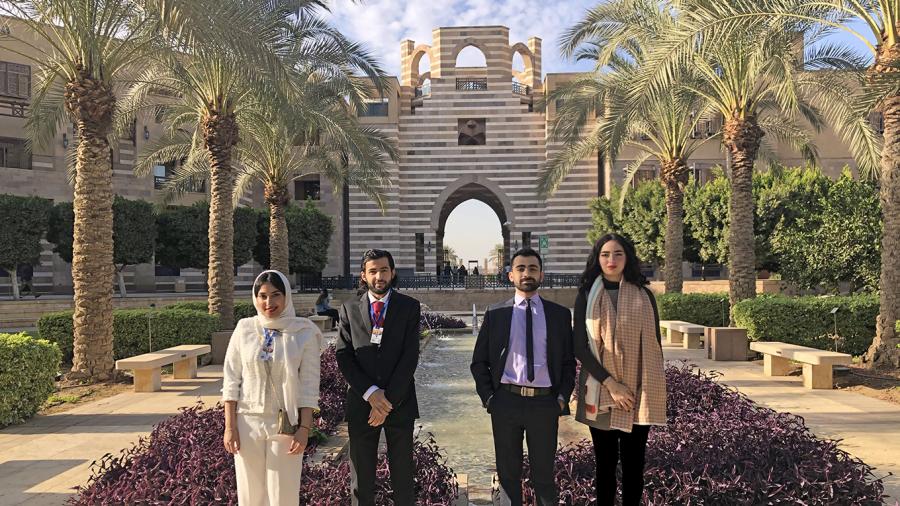 A delegation comprising students from American University of Sharjah (AUS) secured three awards at Cairo International Model Arab League (CIMAL) held recently in Cairo, Egypt. The event, which has been held at the American University in Cairo (AUC) since 1990, aims to educate students about the main functions of the League of Arab States and helps them develop an understanding of the regional and international factors that affect Arab foreign policy.

The delegation consisted of the following team members who represented AUS at the event:

The conference is a platform to discuss and analyze critical issues related to the Middle East. Delegates discussed various political, economic and social affairs pertaining to the Arab World. Fatima Almheiri, a senior majoring in international studies and an award-winner at last year’s event, trained the AUS delegation for weeks prior to the event.

Speaking about his experience, Alzaabi said:

“Starting from the uncertainty of my application for CIMAL 2019 with the possibility of being rejected due to the competitiveness of applicants, moving on to the acceptance and joy that accompanied it, followed by the stress and workload of the preparation, outperforming the delegates in the committee, and concluding with the awards ceremony where I won an outstanding delegate award, CIMAL 2019 has been a memorable experience filled with joy. Despite the fact that I’ve attended many conferences as a delegate, CIMAL 2019 has been one of a kind. I have learned more about the variety of rules and procedures within conferences. I truly enjoyed this event as it further developed my public speaking and problem solving skills. I would highly recommend that students pursue opportunities such as these.”

“Taking part in Cairo International Model Arab League was a rich and unforgettable experience for me. It was a unique opportunity to meet people from different countries to discuss and debate different topics. I am glad that I got a chance to learn more about current issues in the Arab world. The CIMAL sessions developed my soft skills and enhanced my diplomatic and communication abilities,” said Othman.