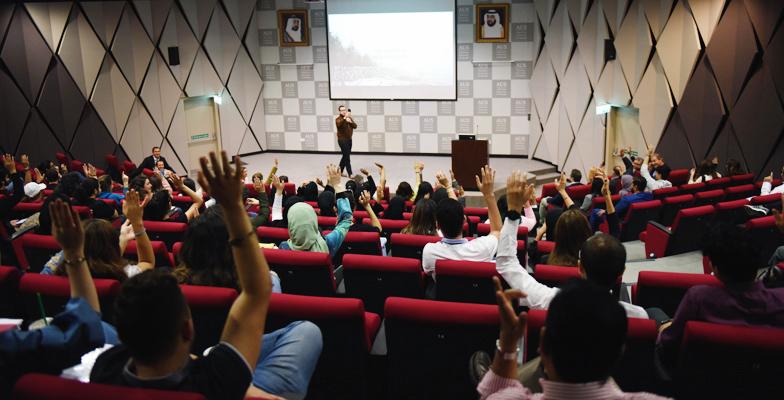 AUS hosts a lecture by CEO of Audemars Piguet

American University of Sharjah (AUS) held an engaging lecture by Francois-Henry Bennahmias, the CEO of the prestigious Swiss watchmaker Audemars Piguet, on November 19 as part of the its Luxury Brand Management program, which was attended by hundreds of AUS students and staff.

Organized by the School of Business Administration (SBA), in collaboration with the Office of Advancement and Alumni Affairs (OAAA), the presentation was entitled “The Spirit of Independence.” During his talk, Bennahmias spoke about the origins and development of the company he leads, and described what the spirit of independence means for luxury management.

Commenting on his experience at AUS, Mr. Bennahmias said “It was a great pleasure to meet the whole team of the American University of Sharjah as well as the students. Addressing the new generation to get their thoughts on our industry and understand what their hopes and priorities are is an incredible source of inspiration for us. We hope to be back soon after such a positive experience.”

Dr. M Sajid Khan, Associate Professor and Department Head, and the Professorship holder of The Chalhoub Group Professorship in Luxury Brand Management, noted that “Audemars Piguet, a luxury brand, we all know that carries a class of its own, art, craftsmanship, excellence, complexity and precision”. “For our students of luxury marketing and design at AUS, the brand Audemars Piguet is a striking example of a point-in-time where art meets a consumer of unique stature,” added Dr. Khan.

After playing golf professionally, Bennahmias decided to pursue a new challenge that would enable him to channel his creativity. He, therefore, started his career in Haute Horlogerie at Audemars Piguet in France in 1994. Within three years, he was promoted to lead Audemars Piguet’s operations in Singapore.

He subsequently went on to head the company in the United States where he played an instrumental role in building the brand, growing the revenue and establishing the company’s flagship boutiques in New York City and Miami.

In May 2012, he became Interim CEO of Audemars Piguet worldwide and was confirmed as Chief Executive Officer for the group in January 2013.