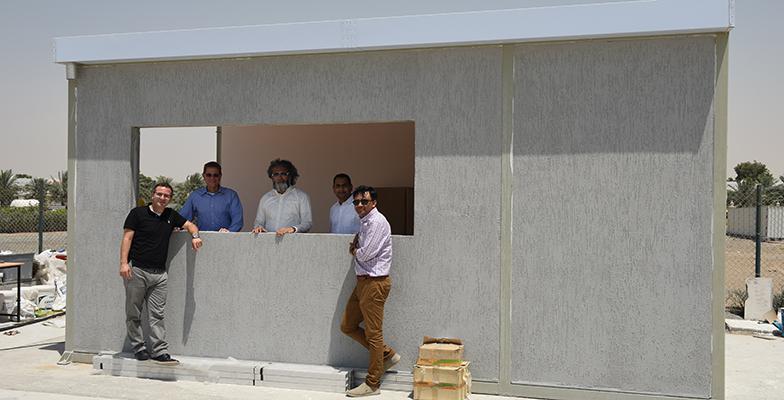 Faculty and students at American University of Sharjah (AUS) have unveiled a “Tiny House” on campus, showcasing the latest research in sustainable and environmentally friendly construction. A team of undergraduate students, professors and alumni from the university have worked together over the past 12 months to design and build the Tiny House, which will serve as a laboratory for AUS students and researchers, and as a platform for future innovation, sustainability and entrepreneurship.

The project is a first for AUS, but it follows a much wider global Tiny House campaign. The movement began in the United States in the 1990s in an attempt to combat the rising cost of housing and the adverse environmental impacts caused by over-sized housing.

Despite the number of people per household declining in the USA over recent decades, house sizes have increased dramatically. The cost of housing relative to average incomes has also risen significantly, isolating many Americans from the dream of home ownership. The Tiny House movement serves as a backlash to these trends, demonstrating that sustainable and comfortable home ownership can be achieved.

At just 194 square feet (18 m2), the AUS Tiny House uses substantially less resources than typical houses in developed countries. The house has also been outfitted with a number of innovations that keep water and energy use to a minimum and reduce its overall carbon footprint, including light-weight panel walls (low cement content with high insulation and fire resistance values), sensor faucets, and grey water reuse. Future plans include solar power on a movable shade, geo-thermal cooling, and a composting toilet.

The project has also served as an excellent learning opportunity for AUS students, who have been closely involved in overcoming many of the practical challenges encountered during the construction.

“Civil engineering students often produce designs and reports for their senior projects; they rarely build what they design. When our students constructed the Tiny House, they saw how easily design mistakes can be made as contractors try to assemble a structure from building plans. In addition, the students felt a sense of accomplishment by promoting small-space, low-cost, sustainable living as a solution to the world’s housing challenges.”

Tiny Houses such as the one built at AUS offer enormous potential globally, as urbanization rates increase and housing space comes at a premium in many of the world’s cities. Tiny Houses offer the opportunity of home ownership to people who would not otherwise have any prospects of living in a space that is theirs, including recent university graduates and aging retirees. In developing countries, Tiny Houses also offer a path out of homelessness and poverty, providing living space that is not only cheap to build, but also relatively inexpensive to run.

A graduate of the AUS College of Engineering, Hasan Mahmoud, who now works as a Project Manager at SAF Panels Dubai, was instrumental to the project, providing many of the environmentally-friendly materials, and offering his knowledge and expertise throughout the design and build. He placed his support behind the project for several reasons, saying;

“My undergraduate experience at the College of Engineering has set me up for a great career, and I was therefore keen to give back to the university, and help current engineering students at AUS who are passionate about the environment. The Tiny House is a great way for students to put their textbook knowledge to the test in a practical way. But this project is not only about helping students to learn, it will also help to generate more sustainable building practices – something that we need to be more mindful of as engineers”.

The Tiny House will remain in the AUS outdoor lab, with students from across the university using it as a space to test new ideas and innovations, shaping what sustainably driven living of the future may look like.