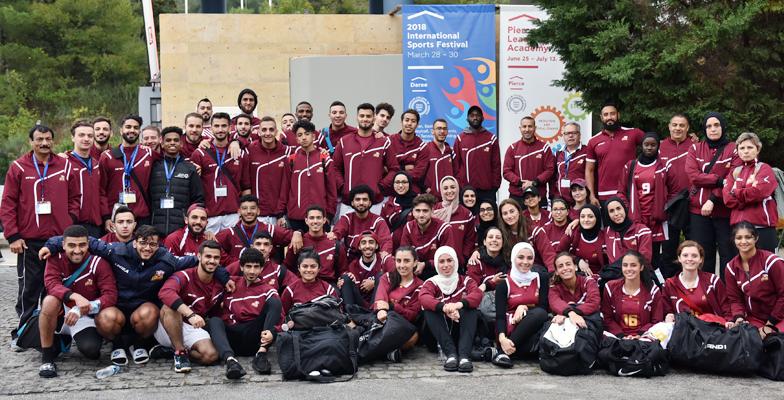 AUS swimmers emerged as the overall champions with 143 points and were ranked first in the men’s category while the women claimed the second spot in their category.  In the men’s category, Ahmed Mohamed Eladl led the medal hunt with 2 golds, I silver and 1 bronze followed by Taher Amr Arafa with 1 gold, 1 silver and 1 bronze while Amr Mohamed won silver in the 100-meter backstroke. In the mixed relays of 4x50 meter freestyle and medley, AUS swimmers Taher Arafa, Khaled Abdulghani, Ahmed Eladl, Cyndi Faber and Dina Allam came second among the seven universities that participated.

In the women’s category, Dina Allam secured three silver medals while Cyndi Faber received a silver and a bronze apart from the second places in both relays.

Six teams participated in the men’s basketball tournament. AUS won three matches and reached the finals to face the home team, American College of Greece (ACG). Mahmoud Trab, Mohamed Azmi and Stefan Bubanja fought well in the final match but the combined attack of ACG in front of their home crowd overwhelmed AUS who had to settle for the runners-up trophy at the end.

Srushti Vipul Kothari and Shaya Iram represented AUS in the women’s table tennis, with Shaya Iram securing second place after a spectacular performance in the round robin tournament.

Eight teams participated in the soccer tournament. The AUS Leopards performed well to enter the knock out stage of the tournament and achieved third place.

Dr. Moza Al Shehhi, Dean of Students, congratulated the athletes on their return and commended them on their remarkable achievements in the International Sports Tournament at ACG. She thanked the athletes for their dedication and involvement in sports along with their academic pursuits.

The AUS squad was accompanied by Munketh Taha, Director of Student Development and Organizations and Head of the AUS delegation, along with seven coaches.