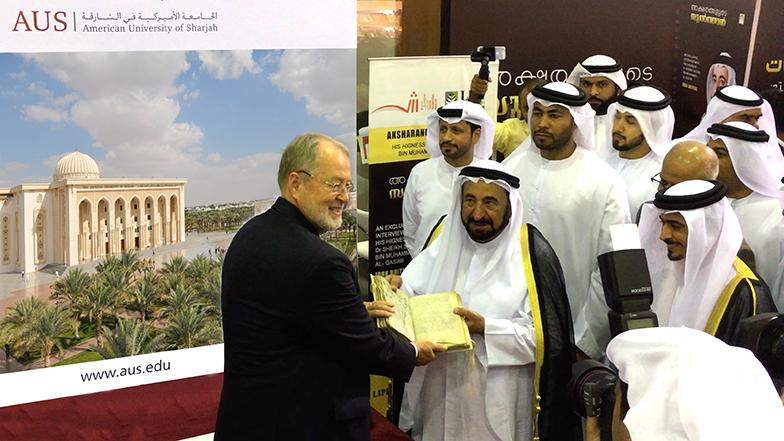 His Highness Sheikh Dr. Sultan bin Muhammad Al Qasimi, UAE Supreme Council Member, Ruler of Sharjah, and President of American University of Sharjah (AUS), received today a replica of the 15th century Voynich Manuscript in celebration of the 20th anniversary of American University of Sharjah. The manuscript, described as “the world’s most mysterious book” was presented to His Highness the Ruler of Sharjah by AUS Chancellor Dr. Björn Kjerfve, at the Sharjah International Book Fair 2017.

Dr. Kjerfve used the occasion to congratulate AUS founder His Highness the Ruler of Sharjah. He said:

“We decided to present His Highness with the replica of this rare manuscript in recognition of his unwavering support to this university which he established 20 years ago as one of the region’s most outstanding universities, offering a world-class, American-accredited education characterized by excellence and innovation in teaching, learning, research and service.”

The manuscript is described as the world’s most unusual and mysterious book. Written at the end of the 15th century in Central Europe, it depicts drawings of figures and strange plants, amid still undeciphered, handwritten text. No one knows for sure who wrote this manuscript, nor what it means. The text is in a writing system many professional and amateur cryptographers have failed to decipher. The drawings show human figures, more than 100 unidentified plant species, and astronomical and astrological symbols.

The Voynich Manuscript presented to Sheikh Dr. Sultan is No. 91 of 898 replicas being produced by the Spanish publishing house Siloe. Slightly bigger than a paperback, the book contains more than 200 pages, including several large fold-outs. Every stain, hole and sewn-up tear in the original manuscript is reproduced in the replica. The paper used is made from a paste developed by the company and given a special treatment so that it feels like the parchment used to write the original.

Earlier this month, AUS started a series of events planned throughout the year in celebration of its 20th anniversary. AUS was recently named among the world’s top 60 institutions under 50 years old by Quacquarelli Symonds (QS) World University Rankings for 2018 and was the only institution in the United Arab Emirates to achieve a 4-star rating. Over the past 20 years, AUS alumni have pursued graduate studies at top institutions around the world and have become leaders in their respective fields.