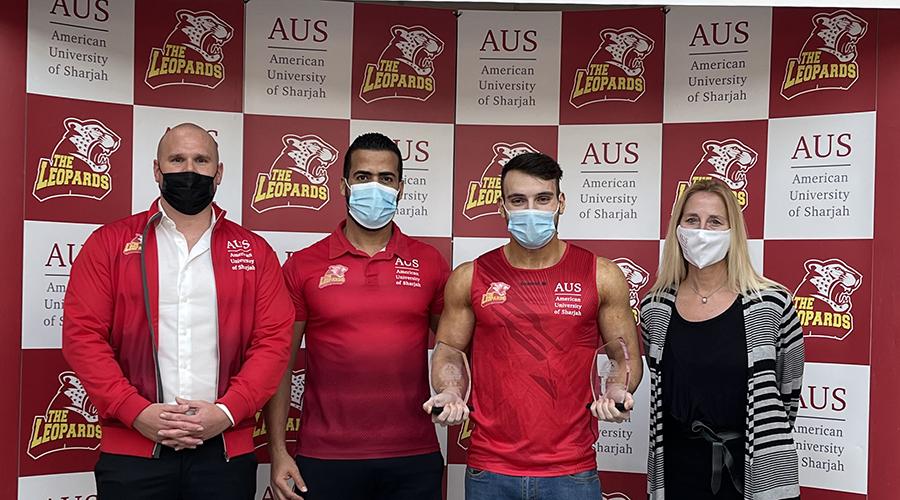 American University of Sharjah (AUS) graduate student El-Cheikh Amer Kais Kaiss was only 16 when he discovered his enthusiasm for bodybuilding. Today, he is preparing to compete in the World Natural Bodybuilding Federation Championship, to be held in Las Vegas this November.

Kaiss, who is is pursuing an MSc in Engineering Systems Management, qualified to compete internationally after placing third at the World Natural Bodybuilding Federation Competition (WNBF) qualifier held recently in the UAE.

“I was once overweight, and I developed an interest in bodybuilding as I was trying to lose the weight. I fell in love with the sport and my goals and ambitions grew with the years. I used to train at the gym but did not really follow a strict diet or a training regime. However, everything changed when I met coach Salem Hassan at AUS,” he said.

Kaiss started training with AUS Fitness Trainer Hassan at the AUS Sports Complex in preparation for the Dubai Muscle Show held at the end of last year. Kaiss came in fifth in his first-ever bodybuilding competition.

“I trained for 19 weeks after which I came in the top five at the competition. It was a fantastic achievement that made me more determined to compete again. So, I trained for another 15 weeks and took the stage at the WNBF. It was easier this time since coach Salem and I had a better understanding of how my body responds to specific training styles and diets. I was also mentally better prepared to enter the national competition. I couldn’t believe the results when they were announced! By coming third, I automatically qualified to compete in the world championship. This is something I never thought I would ever do,” said Kaiss.

Hassan was proud of Kaiss’ achievements and said he has high expectations of him. Hassan said: “The qualities needed to enter this sport and be successful are determination, discipline, and the will to constantly improve. El-Cheikh had all these qualities which enable him to succeed, and I am fully confident about what he will be able to achieve once he competes in November.”

As the world championship draws nearer, Kaiss is intensifying his training regime with the support of Hassan while successfully maintaining a balance between his studies and training.

“I got huge support from the AUS community and from coach Salem, who is guiding me throughout the whole process. The sports facilities at AUS are well equipped, which is extremely useful for my preparations. The staff, like coach Salem, are highly professional and ready to help. Following my experience, I strongly recommend that students explore the Sports Complex and its facilities, particularly if they are interested in a specific sport. I found that setting personal sports goals can be motivating, keeps the mind clear and sharp, and improves productivity and my ability to study,” said Kaiss.

Hassan emphasized the importance of students pursuing sports whether as a hobby or a passion, noting: “Participating in sports encourages health-decision making and has an immense impact on a person’s daily health and life. It does not only help you physically but also mentally. It helps you manage stress, improve your mood, and even combat loneliness as you meet with people. AUS sports facilities are very well equipped with all that helps athletes and sports lovers alike achieve their potential. El-Cheikh has a passion he followed, and my advice to anyone who has sports aspirations is to believe in themselves and start their journey with no fear of failure. All you need is perseverance,” said Hassan.

Kaiss said this experience has taught him a lot about himself and influenced his worldview. “I learned that you shouldn't set limits for yourself. If you work hard, you can achieve far more than you have ever expected for yourself. Just believe in your abilities and pursue what you love,” he said.