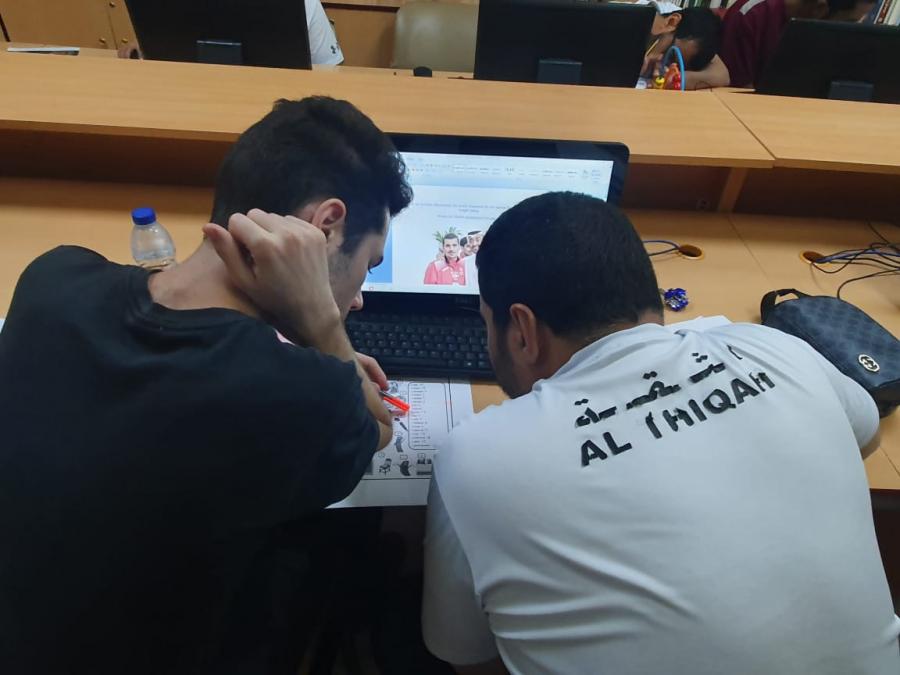 Students from American University of Sharjah (AUS) are volunteering to teach English, computer, and life skills to people with disability at Al-Thiqa Club for Handicapped in Sharjah.

The volunteering program is organized under the umbrella of the Community Services Unit of the AUS Office of Students Affairs. As part of its aim to provide a transformational student experience as well as to contribute to society, AUS offers students opportunities to engage in community service initiatives. Participating in these programs allows students to make a lasting, positive impact in the community.

“We have around 20 learners that we work with, divided into groups that take into consideration their levels, preference of language of instruction, and many other factors. In my case, learners are each assigned a volunteer for one-on-one learning. They are also divided into three groups: a group that exhibits good command over the English language and knows how to construct and write paragraphs with a good knowledge of vocabulary; a second group that knows basic vocabulary; and a third group that is still learning the alphabet, numbers, seasons and so on,” said El-Mihaisi El-Mihaisi, fourth-year mechanical engineering student at AUS.

“I am working on making what I do more systematic so that once I graduate proper documentation is available for the volunteer students who will come after me, to help them know how to work with the learners and what their needs are,” he said.

Reflecting on his experience, El-Mihaisi noted that communication has been the main skill he learned from teaching people with disabilities.

He said: “I learned how to communicate with the learners in a way that addresses their needs but delivers education. For example, I may have a learner who is interested in football but hates talking about numbers. What we do is combine both so he would learn numbers while discussing his favorite subject.”

The volunteer program was first established in Spring 2016 by AUS alumni Ibrahim Ahmed when he was a mechanical engineering student at the university. The program continued after his graduation and remains one of the successful ongoing community engagement and volunteering initiatives at AUS.

“It all started because I wanted to understand more about the challenges that come with mental disability and to find ways to be more involved. So, a group of interested students and I visited Al-Thiqa Club for Handicapped to find out what program we could initiate there. We found people with multiple disabilities. We realized the best way we could get involved was to organize basic English and computer classes,” said Ahmed.

However, the process was not easy. “In the first year, we needed to understand the people themselves, the dynamics between them, their interests, and their levels of understanding and knowledge. For example, we had asked one of the learners to stand before the class and introduce himself, but he broke into tears because he was feeling embarrassed and shy. That’s when we realized we also need to think of social skills. I remember taking a course at AUS about human behavior, so I decided to implement what I learned. I used various teaching techniques to reach the learners—visual aids, sounds, signs, interactive play, and so on. The use of comedy in teaching proved to be a hit with many learners.”

Student volunteers noted success stories from their work. “There was a learner who had multiple disabilities but who simply blossomed during these classes. He started as shy and very self-conscious person. Now, he is fluent in English, can write paragraphs introducing himself and his hobbies, and is not afraid to stand before a group of people to talk,” said Omar Zayed, a second-year computer science major at AUS.

“While we had learners who really improved throughout the program, there were others who, while limited in their learning ability, improved their social skills and have become more open and interactive as opposed to isolated and shy,” he added.

Speaking about the impact of the volunteering program, Isaac Al-Hajjar, Coordinator of the Cultural and Community Development Committee at Al-Thiqa Club Handicapped, noted a tremendous social and educational improvement in the learners.

He said: “AUS volunteers have really changed the lives of the people with disability in our club. They now feel important and not marginalized. Some can speak English fluently, and others have acquired social skills in what I see as a means to integration. AUS students have been committed to the work they do and we have seen examples where people thrived in their new found knowledge and skills.”

Al-Hajjar added: “This is a sustainable volunteering program, which may have started as a spontaneous initiative but has been very beneficial. I look forward to it continuing for many years to come.”