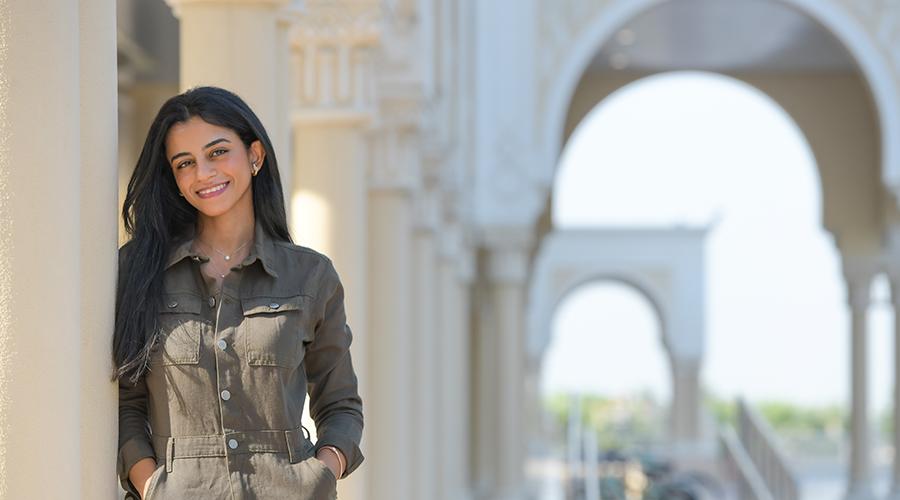 American University of Sharjah (AUS) was one of the highest performing universities in the MENA region at the Global Undergraduate Awards, with 12 students being recognized at the global and regional levels, and more receiving special mentions.

Visual communication student Afnan AlBladi was a global winner for the category of “Visual Arts” for her project “The Art of Destruction.” Regional winners included engineering majors Sara Al Maazmi, Fatima Darwish, Reem Al Ameeri and Mariam Arshi for their project “Smart Cane for the Visually Impaired Using Internet of Things and Artificial Intelligence;” and physics major Mouza Almualla for her project “Kilonova Model Parameters and their Effects on Resultant Lightcurves.” Six AUS students also received special mention for their work at the awards, including Lubna Al Madani and Naser Fakhouri from the College of Architecture, Art and Design (CAAD); Aiman Khan, Noora Almahri and Abeer Khan from the College of Arts and Sciences; and Fathima Nazli Mohammad Ali from the College of Engineering.

Launched in 2012, the Global Undergraduate Awards is the largest and fastest growing academic awards program in the world. It recognizes top undergraduate work and connects students across cultures and disciplines.

It was AlBladi’s passion for exploring controversial aesthetic concepts and breaking traditional artistic molds that won her the global title. Her interest in the concept of art destruction as a deliberate artistic strategy has led her to introduce a new approach to painting in her work, rejecting traditional design principles. Entitled “The Art of Destruction,” the winning series includes five collections: Sabotage, A Portrait of Her, Just Like a Photo, Hands and Missing Content. AlBladi began by creating original paintings, some of which took her months to finish, then destroyed them intentionally. She subsequently painted over the work. She simultaneously exhibited two different versions of the same painting to communicate different definitions of art—the traditional and contemporary.

“Art should be free of restrictions. Therefore, damaging or decomposing an artwork is a powerful form of expression that needs to be addressed. ‘The Art of Destruction’ is a form of protest and a rebirth of painting traditions. It follows a contemporary viewpoint, which utterly opposes perfectionism in technique and highlights the thought,” she said.

AlBladi showed her painting to one of her professors during one of the classes, who encouraged her to display her work and the process of destroying them. She ended up producing five paintings for the class but continued her work by producing close to 14 artworks in five different collections, each communicating the idea of destruction from a different point of view. Later on, she submitted these collections to the awards program.

Speaking about the impact CAAD has had on her and her work, she said: “CAAD has helped expand my horizons. I was simply an artist when I first joined, but today I am an artist and a visual designer who is open to experimentation and the use of different media. I am more confident about my work and expressing it.”

She added that being selected as a global winner was both surprising and fulfilling.

“I did not expect to win. I was more focused on the project than the competition. This win opens new opportunities for me. Not only do I get to be acknowledged on a global network, but my work is now being seen by people from all over the world. I learned from the process that if you are hardworking and passionate, you will be able to achieve what you want. Believe in yourself even if they called you insane for ruining your own paintings,” she said.

For more information about AUS and its undergraduate programs, visit www.aus.edu.