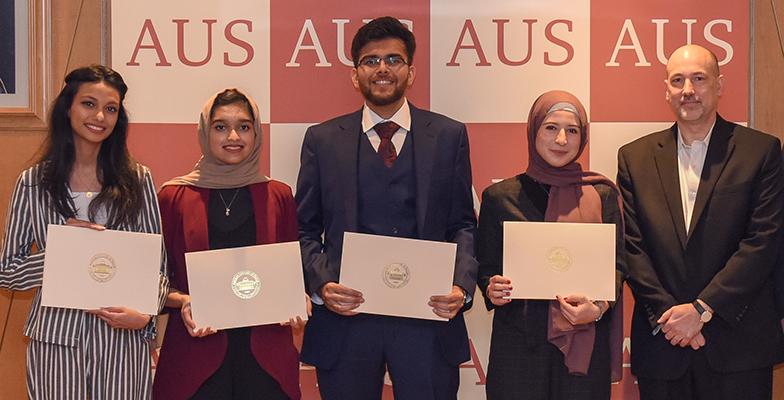 Four students from American University of Sharjah (AUS) received the Sheikh Khalifa Scholarship, a competitive award that recognizes academic excellence, leadership potential, service to the community, demonstrated talent in the field of study, and participation in extracurricular and university activities. It is the highest honor awarded at AUS, according to AUS Acting Chancellor Kevin Mitchell, who awarded the four outstanding students on April 25, with the prestigious scholarship for the academic year 2019-2020.

The winners of the Sheikh Khalifa Scholarship were Lamiah Koduvayakkal from the School of Business Administration; Wara Bokhari from the College of Arts and Sciences; Taha Ameen from the College of Engineering; and Dania Al Darra from the College of Architecture, Art and Design. The four students were selected based on their excellent academic standing and participation in extracurricular activities. The latter includes taking part in cultural events and student clubs, international competitions, student organizations and volunteer work.

Also present at the special ceremony were Dr. Juan M. Sanchez, Provost and Chief Academic Officer; other senior university officials and faculty members, as well as family members of the scholarship recipients.

The scholarship is awarded through an annual two-stage competition that includes a rigorous review of applications by committees within each college/school and by a university committee that includes representatives from academic and non-academic units. The scholarship identifies students who exemplify the ideals of open intellectual inquiry, ethical behavior, and social and civic responsibility that form the core of the AUS mission.