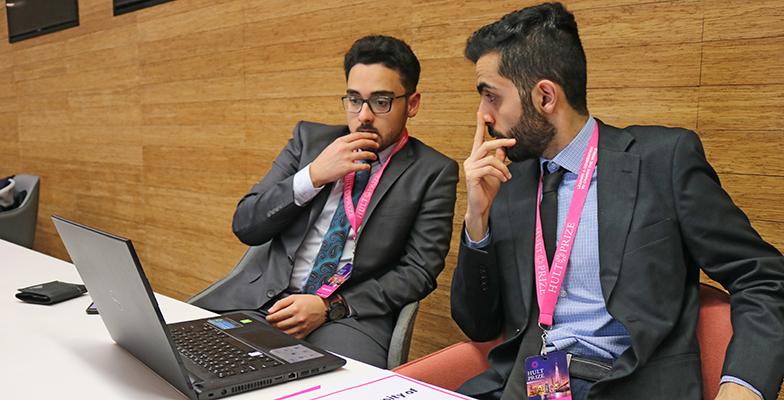 Three teams from American University of Sharjah (AUS) participated in the Hult Prize regional rounds in Dubai, Shanghai and Kuala Lumpur during March. The teams were announced as  finalists during the Hult Prize On-campus Challenge which was held at AUS on December 6, 2018 and organized by the AUS Student Leadership Program. This year’s theme was for students to come up with a scalable sustainable enterprise that tackles youth unemployment asking the question: “Can you build the foundations of a venture that will provide meaningful work for 10,000 youth within the next decade?”

The team at the regional round at the Hult International Business School in Dubai on March 9 consisted of Farah W. Mujahed, Mais Mais Al Atallah, Layla Khanfar and Karim Hodroj-Remmel. Soroush Shirazi, Mohammad Latifi and Parham Pour represented AUS in the Hult Prize regional round in Shanghai, China, March 22-23. The Kuala Lumpur regional round was held March 29-30 and the  AUS delegation consisted of Aasim Naseem, Sayed Kumail and Ali Raza.

The regional rounds kicked off with a preliminary round of presentations followed by peer feedback and the Judges’ Deliberation and Callback Session. In the evening, six teams were selected as finalists to pitch their ideas, from which one winning team was announced.

Soroush Shirazi, a senior student majoring in mechanical engineering said: “Competing in such a high-level business competition as someone who is majoring in the engineering world, was a brilliant experience. It was a great honor to meet and network with entrepreneurs and CEOs who came from around the globe to judge the projects, as well as the 38 professional participating groups with their amazing ideas to change the world. We learned the fundamental principles of how to develop a business idea, which is definitely an excellent achievement.”

Syed Kumail, a sophomore majoring in computer science, said: “The Hult Prize regional round in Kuala Lumpur was a good opportunity for us to network with successful entrepreneurs from all over the world and present to them our ideas and receive feedback. We were also able to meet and learn from many other students from all around the world working on impactful business ideas. It was an enlightening experience as we learned a lot about how to pitch for a business idea and about factors that determine your success as a businessperson.”