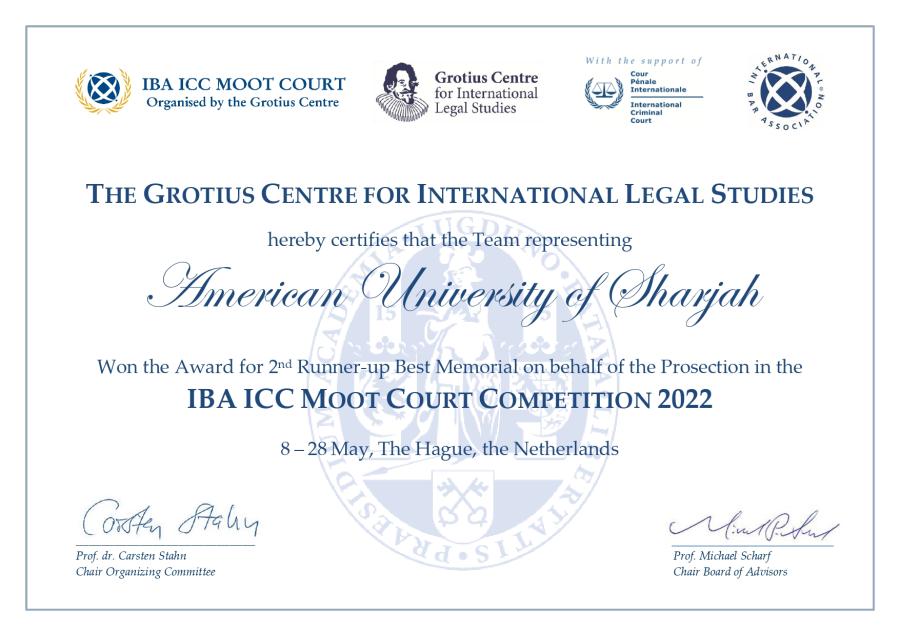 At the end of a seven-month journey, a team of AUS students were honored at the  International Criminal Court (ICC) Moot Court competition for their work in trying a  fictional case involving aiding and abetting war crimes and crimes against humanity. The team won third place for the Best Prosecution Memorial out of 76 participating universities from 42 countries.

Organized by the Grotius Center for International Legal Studies at Leiden University, the 2022 virtual edition of the International Bar Association ICC Moot Court taught students the fundamentals of international criminal law and procedure through many hours of research, writing and practice. Students developed expertise in the ICC’s statute, rules, negotiating record and precedents, and honed impressive advocacy skills that they will carry forward in their careers.

The trial required participants to develop written arguments (known as  memorials) and deliver an oral pleading before the ICC.

“We had a total of six members on our team comprising a coach, an assistant coach and a researcher. The rest of the team either represented the defense, prosecution (like me), or the victim’s council. Our coaches provided valuable information on case law and advocacy skills to help us produce solid memorials and deliver oral pleadings. Our researcher helped us find case laws and assisted in considering possible counterarguments. Those representing the three roles were tasked with writing the memorials and delivering the oral pleadings. Our team was very supportive of each other. We collaborated and exchanged ideas even when we were on opposing sides. We also challenged each other in our weekly online meetings. I am sure my memorial did as well as it did because I benefited greatly from my team members challenging my arguments, which helped me produce a solid memorial,” said Noora Almahri, an international studies major who graduated in Fall 2021 and drafted the prosecution memorial.

“Before writing the memorial, I had spent months brainstorming, researching and discussing possible arguments and case laws with my team. To develop a strong prosecution argument, I had to go through many case laws, some of which supported my arguments while others completely opposed them, which was frustrating. Soon, I started writing my memorial and included in it rebuttals to arguments I thought the defense would submit in their memorials. Writing 10,000 words is far from easy, but once you truly start immersing yourself in the role you represent, it becomes less overwhelming,” said Almahri.

She added: “Preparing for the oral rounds was most challenging and intimidating. During the oral round, the speakers had to present their strongest arguments within 20 minutes while also answering the judges' questions. After finishing your plea, you must pay attention to the opponent's argument and prepare for the rebuttal. Although I had become fully versed in my arguments and prepared for counterarguments, I was still nervous. I overcame this challenge by practicing my pleading with my team and got our coach to ask us questions. During the oral round, our researcher helped me draft the rebuttal.”

Almahri noted that her AUS education prepared her to stand before the judges in an ICC moot court and argue her case against war crimes and crimes against humanity.

“My education at AUS allowed me to reflect on varying perspectives on any topic and to communicate effectively whether in writing or in oral presentations. More specifically, through the course INS 350 on Moot Court, I was able to participate in this competition. I learned about essential advocacy and litigation skills by delivering oral pleadings and developing legal briefs. I was surprised when our team came in third for the Best Prosecution Memorial, considering that most of the memorials submitted in the competition were by law students. It was rewarding to have the hours of preparation, research and writing with the help of my team get recognized,” said Almahri.

Mohammad Alzaabi, an international studies major who graduated Spring 2022, was assistant coach on the team. In this role, he  guided the students through advice and constructive feedback on the written and oral assignments. This is his second participation in a moot court, as he previously represented the government council in a case of alleged spread of the H5N8 Avian Influenza from the fictional State of Wessos to its neighboring State of Eassos.

“Winning an award in this year’s competition is unbelievable especially since this is our second consecutive participation in the competition after a very long time of not participating. This was a result of our dedication and hard work throughout the past months,” said Alzaabi.

He added: “Participating in moot court enhances students' legal literacy as well as offers them an opportunity to interact with experts in the field of international law during the competition. I believe studying at AUS equipped me with the intellectual capability to step into moot court and compete with students from all over the world in a very competitive and professional setting. Students who participate in moot court improve their public speaking, research, critical thinking and interpersonal skills. These are crucial for today's generation.”

Members of the participating AUS team also included international studies majors Theyab Aldarmaki in the role of defense counsel, Lana Badruddin as counsel for the victims and Suhail Alzarooni as legal researcher.

Speaking about the win, Dr. Giacomo Chiozza, Professor in Political Studies and Sir Easa Saleh Al-Gurg Professor of International Studies at AUS and the team coach, said: “The ICC Moot Court competition is an opportunity to take the work we do in our classes one step further. Students work on salient issues of justice, law and politics that are at the core of the learning mission of our international relations program. The competition provides our students exposure to issues they will be addressing should they decide to pursue careers in the legal profession.”

Over the last two decades, the AUS Department of International Studies  has grown into one of the largest in the College of Arts and Sciences. It is home to six disciplines—political science, history, sociology, anthropology, philosophy and psychology—and more than 20 highly qualified teacher-scholars with degrees from some of the worlds’ top universities. The growth of the department reflects the increasing popularity of the fields of international studies and psychology in the region and the success of its alumni.

For more information on the AUS Department of International Studies, visit www.aus.edu/cas/department-of-international-studies.