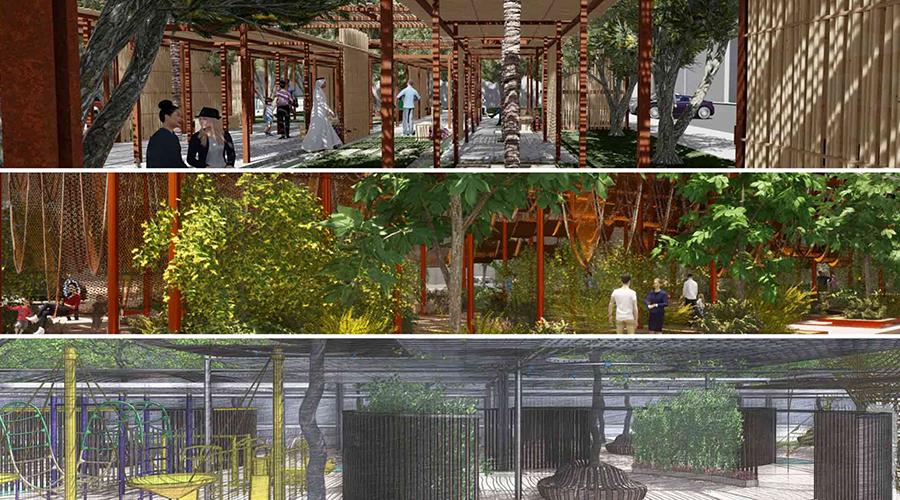 Creatively addressing the impact of climate change in the UAE, Amna AlHashimi and Fatma Oualha, alumnae of the College of Architecture, Art and Design (CAAD) at American University of Sharjah (AUS), have been named winners of the Cool Abu Dhabi Design Challenge. The global design competition was organized by Abu Dhabi’s Department of Municipalities and Transport, calling for solutions for the urban heat island effect in Abu Dhabi.

Oualha, an architecture graduate from Tunisia, said the competition provided an opportunity to contribute to increasing public awareness of environmental issues related to sustainability and climate change—issues that were addressed regularly throughout her architecture studies at AUS.

AUS students are exposed to a wide range of opportunities to explore new ways of impacting sustainability through projects and research. The university was recognized earlier this year as the first university in the MENA region to have a Sustainability Tracking, Assessment and Rating System (STARS) classification for sustainability in higher education, awarded by the Association for the Advancement of Sustainability in Higher Education (AASHE).

“Education and awareness about these topics is critical, and CAAD has impacted me as a designer by discussing and implementing them in almost every course and studio I took,” she said.

Oualha’s design Arqoob creates a distinctive canopy structure with a swing-like feature providing shade and an innovative system for creating fog to cool the air.

AlHashimi, an Emirati architect, said this competition was an opportunity to demonstrate her learning from CAAD, balancing creativity and functionality, and drawing from both traditional and modern architectural styles, while being mindful of environmental factors such as the UAE’s intense climate.

AlHashimi’s design concept Sa’ad Al-Nakheel is inspired by the traditional dried palm fronds or “areesh” used in the UAE and features a modern steel structure with an interwoven, multi-layered areesh canopy and walls, and courtyards filled with planting. Water is deployed strategically in shaded areas for enhancing comfort through evaporative cooling.

“Architecture in the region seems to be a battle between the modern and the traditional. In addition, the concept of environmental consciousness has been a great development throughout the years. CAAD allowed us to think of these issues actively while designing, which inspired my design as I merged modern and traditional features that are both comfortable and convenient,” she said.

Al Maeeni, also from the UAE, said it’s encouraging to see the UAE take such a successful initiative in sustainable urban planning. She and her fellow alumni attributed their success to the mentorship of Assistant Professor of Architecture George Newlands at CAAD.

“CAAD has definitely provided us with a solid foundation designing for sustainability, and now it’s our responsibility as individuals to implement and build on what we’ve learned in order to contribute to a more environmentally sustainable region,” said Al Maeeni.