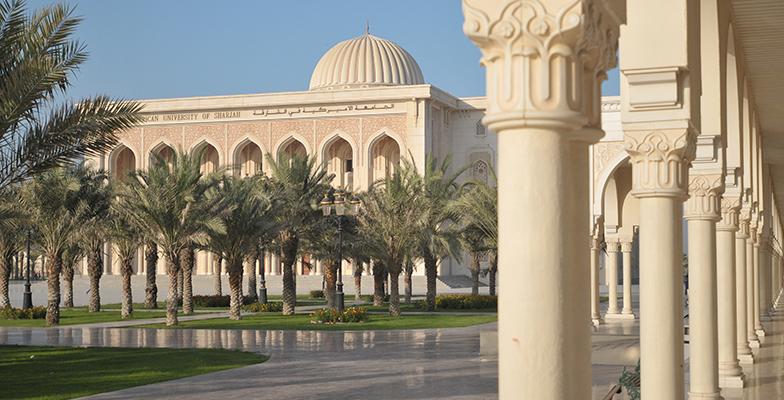 The remarkable history of Wadi Al Helo – one of Sharjah’s UNESCO World Heritage nominated cultural heritage sites – is being told using a unique Virtual Reality (VR) application developed by American University of Sharjah (AUS) in an effort to highlight Sharjah’s important role in the region’s economic and political history.

Supported by Dr. Varkki Pallathucheril, Dean of the University's College of Architecture, Art and Design (CAAD) and Zlatan Filipović, Associate Professor of Art and Design and Interim Head of the Department of Art and Design at CAAD, this innovative example of storytelling using VR is part of a research project that tells the story of Sharjah's Wadi Al Helo (which means ‘Sweet Valley’ in Arabic) in support of Sharjah's Gateway to Trucial States (SGTS) project.

Wadi Al Helo, with its historic village and several watchtowers, played an essential role in the history of Sharjah and is considered an important cultural site in the UAE. Engulfed by the mountains along the caravan route, the Valley was secured by watchtowers located at its entrance to protect it from raiders and was known as a safe haven allowing its communities to work in agriculture and then export their products to coastal areas.

“We initiated this VR project with a pilot case of Wadi El Helo as part of the SGTS strategic vision to communicate the uniqueness of these sites to the world. At the same time we wanted to create an opportunity for students and local communities to be part of our vision,” said AlHouli.

“The SGTS project is for the entire nation of the UAE. While we always seek to engage the various sectors  of the UAE community with our cultural heritage, the SGTS nomination project provides a unique and specific platform to share our rich history with all members of the public,” AlHouli said.

AlHouli continued: “We are very thankful to the AUS team who hugely welcomed this idea and provided outstanding support. With their expertise, we have created a unique and innovative experience through the merging of heritage and technology, which really speaks to today’s technologically-savvy audience.”

The VR project will be ongoing, with the view to incorporate eight heritage sites across Sharjah which make up the UNESCO nomination, including four sites in Sharjah city, two in the middle region of Sharjah, and two on the eastern coast.

Dr. Varkki Pallathucheril commented: "It is such an honor to work on a project related to Sharjah’s rich history and cultural heritage.  We tried to be different and tell the story of yesterday using today's technology. We hope to continue doing the same for all the sites”.

In telling the remarkable story of Wadi Al Helo, the group worked together to create several installations which were developed using different media.

“Our intention was to use Virtual Reality technology to bring to life the stories of the historic valley. This was an excellent opportunity to demonstrate how storytelling through VR can be used to enhance the way we understand the world, both past, present, and future" said Filipović.

“I am honoured to have been able to contribute to such an important project for our community,” said Filopović.

As an example of Reactive Immersive Cinema – which aims to move the audience from being mere spectators to actual participants in the story –  the audience is positioned at a media station in the middle of several pre-recorded 360° videos. This allows individuals  to experience the landscape of Wadi al Helo, while an interface with a rotational button allows them to pan across sections of the video.

The ongoing SGTS research project uses cutting-edge technology, such as photogrammetry, hypermedia, and user-experience design to create new ways of interacting with the various stories bound up in the history of the Valley.

As part of this ongoing partnership, SGTS will supply equipment and finance the freelance work of Berlin University, and provide guidance on content and research. SGTS will also recruit student interns from AUS from different disciplines as part of the organization’s commitment to engage young professionals.

For more information about the College of Architecture, Art and Design, visit www.aus.edu/caad.