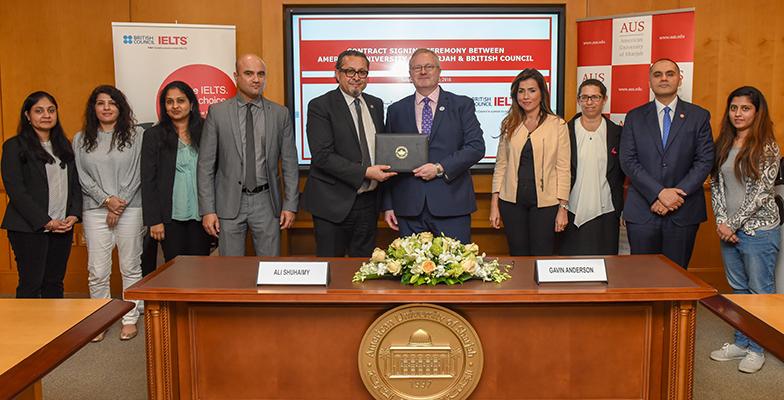 The American University of Sharjah (AUS) Testing Center will be the first British Council UAE center to offer the Computer-delivered IELTS (CD IELTS) in the country following an agreement signed November 20 between AUS and the British Council in the UAE.

The agreement, which comes as part of the continued collaboration between the two institutions, was signed by Ali Shuhaimy, Executive Director of Enrollment Management at AUS, and Gavin Anderson, Country Director—UAE at the British Council. The AUS Testing Center operates as a British Council Test Center offering IELTS testing to more than 5,000 test takers every year.

Speaking on the occasion, Shuhaimy said:

“This is a significant occasion and we are very pleased to be the first British Council UAE center to introduce the CD IELTS in the UAE. The first CD IELTS test will take place on November 21. We are excited about the prospect and are happy that the British Council partnered with the AUS Testing Center to launch its CD IELTS.”

Test takers will also be able to take IELTS – the world’s most trusted high-stakes English test – with the British Council on a computer in Abu Dhabi, Dubai and Sharjah.

“We’re delighted that American University of Sharjah will be leading the way in offering computer-delivered IELTS to test takers. Launching CD IELTS was the result of listening to our customer feedback and insight here in the UAE. With the majority of us working in professional environments where we are constantly communicating through computers, it made sense to offer customers more choice so they could take the exam through whatever medium they feel most comfortable using. In addition, computer-delivered IELTS enables us to provide people with faster results in five to seven days, which we know our busy customers will value.”

The CD IELTS will give prospective test takers more flexibility in choosing the date for the test as it will be offered more often than the paper-based test, with an easier booking process.