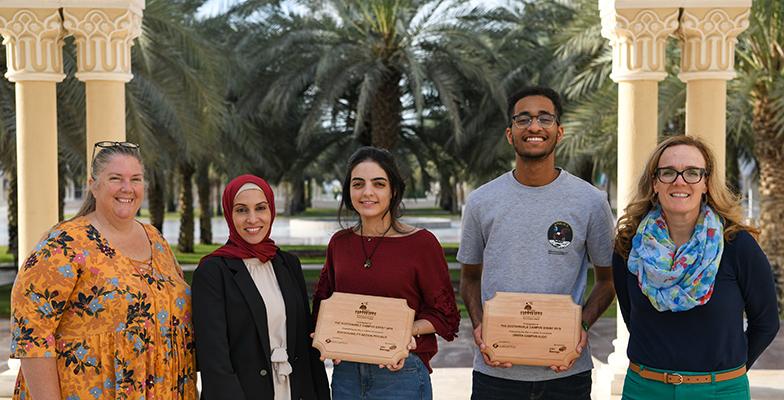 AUS tops the class in sustainability

American University of Sharjah (AUS) continues to raise its environmental credentials, with the past 12 months seeing the university achieve a number of sustainability-related successes. In January, AUS became the Gulf region's first university to begin to ban single-use plastics across its campus, with all campus vendors banned from selling plastic water containers holding less than 500 millimeters of water. Hot drink cups, takeaway containers, single-use plastic bags and cutlery have been replaced with environmentally friendly plant-based and biodegradable alternatives.

The plastics-ban follows the launch of AUS' new Engineering and Sciences Building, awarded a highly sought-after "2 Pearl" rating by Estidama, a sustainable development initiative of the Abu Dhabi Urban Planning Council. The rating complements AUS' position as the first university in the MENA region to have a Sustainability Tracking, Assessment and Rating System (STARS) classification for sustainability in higher education, awarded by the Association for the Advancement of Sustainability in Higher Education (AASHE).

The university is committed to ensuring its students are at the forefront of its environmental advocacy, championing environmental causes that have impact beyond the campus. AUS students received two major honors at the recent Abu Dhabi Environmental Agency and Ministry of Higher Education's Sustainable Campus Initiative (SCI) awards and exhibition. A group of students known as the AUS Green Team won awards for the Best Green Campus Audit and the Best Sustainability Action Project. The AUS Green Team is based in the AUS College of Arts and Sciences (CAS) but welcomes students from across the university and is made up of students eager to educate their peers on issues such as waste reduction, energy conservation, diversity and tolerance. Mohamed Yousef, an environmental sciences student in CAS, said of his participation in the winning AUS Green Team:

“As a member of the AUS Green Team for the 2018–2019 academic year, I feel the awards prove AUS students’ commitment to objectively review sustainability indicators and discuss ways of improving them in the most efficient and sustainable way.”

Through the Green Campus Audit, AUS students assessed the university’s per capita use of key environmental indicators, such as energy and water use, and climate change. Working with the AUS Sustainability office, the students procured data from across the university’s corporate functions, as well as external organizations. The results of the audit have provided valuable data, allowing AUS to more accurately track and improve its environmental credentials. According to Dr. Sandra Knuteson, an environmental sciences senior lecturer in CAS and a mentor of the Green Team, "This project develops universities into living laboratories providing experiential learning for students to really delve into the management of sustainability in the running of an organization's operations and facilities."

AUS received the award for Best Sustainability Action Project for a program it ran with high schools who are part of its Sharakah partnership program, where students were challenged to minimize consumption of single-use plastics through practical creative solutions. The project was an initiative of the AUS College of Engineering, in collaboration with the AUS Office of Enrollment Management and Office of Student Affairs. A total of 17 schools became involved in the project, which was officially branded “Decreasing the Consumption of Single-Use Plastic Water Bottles.” A team from the Al Shola Private School won the competition, and were presented with their award at AUS.

“Both the Green Campus Audit and Sustainability Action Project are ways that individuals can work together to make a positive impact. Having an impact on global issues such as climate change seems enormous, but bringing people together to achieve a common goal is a way that we can make a real difference for the better. The exhibition of the Sustainable Campus Initiative is one way of achieving this. I am so proud that AUS has been acknowledged for the great work it is doing in the sustainability field.”

These environmental endeavors complement the sustainability-focused academic offering of AUS. The university’s Bachelor of Science in Environmental Sciences, offered through the AUS College of Arts and Science, allows students to study environmental issues using scientific methods. In their senior year, students of the program tackle a real-world environmental issue through an internship program and via the guidance of an experienced mentor. It was students and faculty from this program who were very much behind AUS’ original involvement in important sustainability initiatives like the SCI.

Rose Armour, as Head of Sustainability at AUS, says the work of students like those in the AUS Green Team show that there is no shortage of ways AUS students can become environmental advocates, and that all majors can be related to sustainability in some way:

“Most students at AUS are taking sustainability issues seriously. Even if students are not looking to pursue a career in sustainability, they want to make a difference. My goal is for AUS students to graduate with sustainable values that guide them in their professional and personal decisions to be responsible citizens. The SCI is a great way to do this, allowing students to do their part for the environment.”