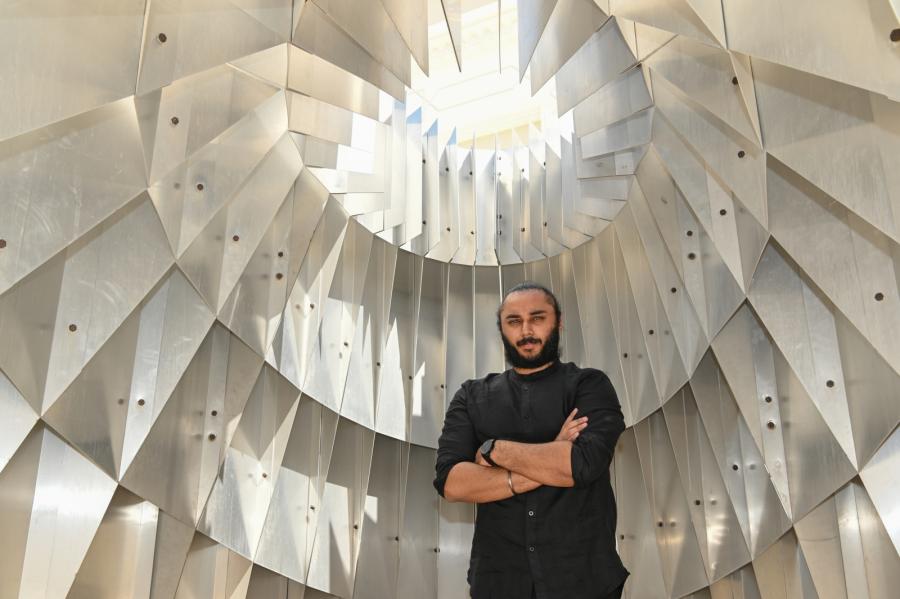 For multi-award-winning American University of Sharjah senior architecture student Sahil Rattha Singh, this personal mantra has certainly served him well. Throughout his five years of studies at AUS’s College of Architecture, Art and Design (CAAD), Rattha has won 20 major  regional and international design awards and is about to embark on the opportunity of a lifetime–an internship under the mentorship of renowned Japanese architect Kengo Kuma.

Following his graduation in January, Rattha will travel to Japan to take up a resident internship in Kuma’s Tokyo-based firm, considered to be Japan’s most prolific architectural office and among the world’s best.

“It's a dream come true to work with a master like Kengo Kuma. I've always been curious and amazed by his work and I believe this will be a great learning opportunity for me,” said Rattha.

Born and raised in Chennai, India, Rattha moved to the UAE specifically to study at CAAD. From his very first year of foundational design studies, Rattha began entering his creative work into competitions against senior students and industry professionals.

“All the work that has either been recognized or won was produced during my CAAD courses or directly involved the architecture faculty who mentored me through all the projects, even throughout the pandemic. I am extremely grateful to the CAAD dean and faculty as none of the awards and accolades would have even been possible without their constant support,” he said.

Encouraged by his cousin who graduated with a Bachelor of Interior Design from CAAD, Rattha was initially attracted to the competitive nature of the program. AUS is ranked number one in the UAE for architecture and design studies, according to the QS World Subject rankings, and benefits students like Rattha with global career opportunities due to its accreditation in the UAE, USA and India.

“CAAD is internationally renowned with some of the best faculty in the Middle East, which really pushed me towards moving here. I believe CAAD has equipped me with the necessary skills to compete with the top architects on a regional and global stage, allowing me to practice architecture that’s striving to achieve a sense of equilibrium between social, contextual and performative aspects of my work while also being culturally applicable and environmentally sensitive,” said Rattha.

Receiving recognition from the Royal Institute of British Architects (RIBA), American Society of Architectural Illustrators, Global Undergraduate Award, Abu Dhabi Art and Sharjah Suitability Awards, among others, Rattha said the award closest to his heart is the 2020 Christo and Jeanne Claude Award. Along with two other AUS alumni, Rattha received the award for their pavilion Haweia.

“I've always admired the late great Christo and Jeanne Claude's work. It was my third year at CAAD and my first major achievement as I was competing with the seniors, alumni, professionals and artists all over the UAE. When we won the award after presenting it at NYU Abu Dhabi, I was supposed to meet Christo in person with my team—but sadly he passed away before we could,” said Rattha.

“We later found out that he had seen the proposal, so this was an extremely important award, and we dedicated it to Christo. My team and I worked during the global pandemic through all the adversities while also coordinating from three different countries under the mentorship of Professor Jason Carlow. The pavilion finally came to life a year later,” he said.

The pandemic brought more disappointment to Rattha when he was forced to miss a highly competitive internship with world-renowned Danish firm the Bjarke Ingles Group (BIG) in their Copenhagen office.

“After getting shortlisted and passing the interview round it didn't work out due to the global pandemic and other logistical complications. Since then I shifted my focus to independent projects and competitions. The constant support of faculty and the environment in CAAD have been important factors to my determination to keep creating and competing,” he said.

Projected to complete his studies at the end of 2022, Rattha describes his AUS experience as “truly transformational” and is confident that CAAD has equipped him for his bright future, soon to start in Tokyo.

“Over the past five years, I have undergone immense growth and maturity in my academic, professional and social life. The highlight would be the friendships I've formed and the various opportunities I've received while working with some of the best faculty at CAAD,” he said.

“This would not have been possible without the help of my professors. In addition, I was inspired by the legacy of CAAD alumni that inspired me to push myself to match or even exceed them in their achievements. I hope my work inspires countless incoming students just like I was inspired by the impressive alumni dominating and pushing the boundaries of the design industry in the region and globally,” he said.

For more information about the College of Architecture, Art and Design, its programs, faculty, students and alumni, visit w.aus.edu/caad.