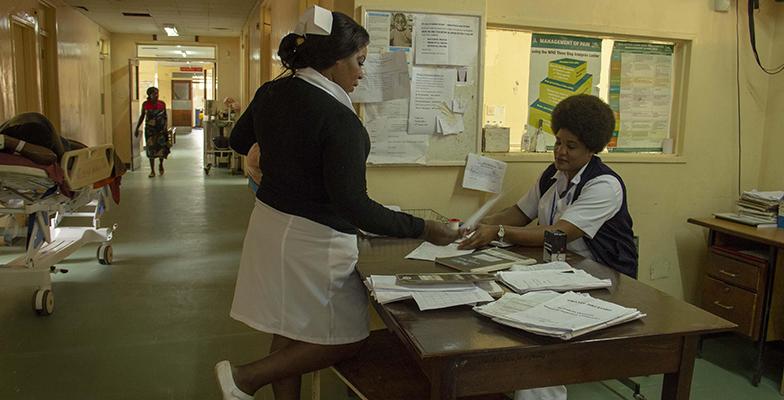 Assistant Professor Becky Beamer from the College of Architecture, Art and Design (CAAD) at American University of Sharjah (AUS) has received the Jury Prize for Best Documentary Short Film at the Portland International Film Festival 2018, for her film WARD: B12.

Ward: B12 offers a hyper-realistic behind-the-scenes view of the low-cost maternity ward, B12, at the University Teaching Hospital in Lusaka, Zambia.

Following patients, doctors, caregivers and midwives as their days intersect and unfold, Beamer’s short film highlights a series of powerful narratives about determination, strength, life and loss, and raises awareness of the need for improvements in healthcare for the women of Zambia.

“About one in 79 women die of pregnancy complications in Zambia. There is clearly a need for improvement to protect some of the most vulnerable. Yet, while the World Health Organization has mandated that women’s health should be a priority, frequent power outages, outdated equipment and a general lack of resources leave the women in disheartening situations ranging from stillbirth, to economic uncertainty, contraceptive questions and complications with HIV/AIDS,” said Beamer.

“These are globally significant, easily relatable issues that bridge borders and have the potential to deliver a new, significant point of view to an international audience. The empowerment of a unified women’s voice is extremely significant to the development and cultural understanding of women’s health issues in Zambia and in the context of Sub-Saharan Africa,” she said.

During the making of the film, Beamer was given exclusive access to the ward as she was invited into the daily struggles of medical staff and the personal pain of many of the patients who are forced to deal with the high rate of mother and child mortality, the threat and reality of HIV/AIDS diagnoses, and an unending cycle of complex socio-economic challenges.

"This was one of the most challenging documentaries I've worked on in my life. I was working on difficult topics, with emotional situations, maneuvering new governmental procedures, all while staying in less than desirable living conditions,” she said.

The project was made possible through the continued support of the Zambian people, the US State Department, Zambian Ministry of Health, UTH Staff/Medical Personnel and the University of North Carolina’s Division of Global Women’s Health.

“I am so grateful for their generosity in allowing me to create this documentary in support of this cause, and I hope that it brings awareness of the current situation in Zambia,” said Beamer.

Beamer submitted her film in early 2018 and was informed of her win only after attending the festival at the end of the year.

"I was shocked to hear about the award. I had to wait on official confirmation before spreading the word. The festival was filled with award-winning shorts, and I am honored to be recognized by my peers," said Beamer.

"The Portland Film Festival was the perfect host for this type of film, as it needed a socially dedicated audience who could also handle artistic visions of documentary film," she said.

When she is not creating her own work, Beamer teaches the next generation of filmmakers, multimedia artists and designers at CAAD, the leading institute for architecture and design in the region.

The award-winning documentary filmmaker is also a book artist, and Fulbright Fellow, having received her Bachelor of Fine Arts from Pratt Institute and a Master of Fine Arts from the University of Alabama. Beamer has also worked on documentary television for companies including National Geographic, Smithsonian, Discovery and PBS for 15 years.

For more information about the College of Architecture, Art and Design, including previews of faculty and student work, visit www.aus.edu/caad.