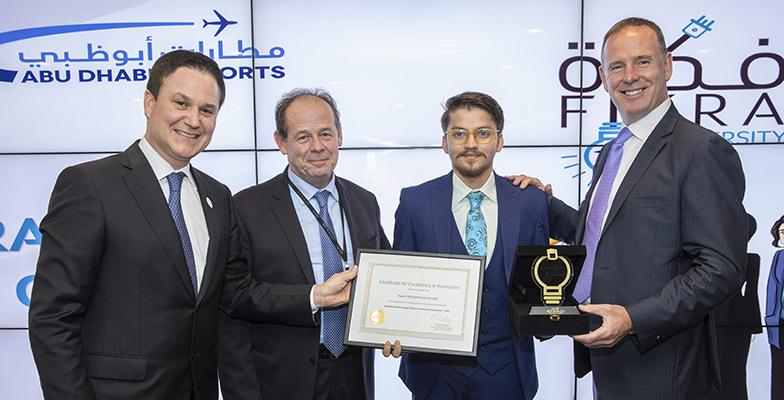 Nasir Mohammed Khalid, an electrical engineering major from the College of Engineering (CEN) at American University of Sharjah (AUS), was declared one of the winners of the Fikra University competition organized by the Etihad Aviation Group. Khalid received his award at a special ceremony held at Etihad’s Training Academy in Abu Dhabi recently.

In its second edition, the competition saw 44 universities participating with 2,850 students registering for the event and more than 400 projects submitted. The shortlisted projects were selected by a panel of experts who mentored the students and helped them develop their ideas. Wining the individual category, Khalid’s project focused on developing a cargo-tracking device that significantly increased efficiency of the cargo monitoring process. The winning project earned Khalid an internship with the Etihad Aviation Group, Abu Dhabi Airports Company (ADAC), or one of their select strategic partners.

“We are very pleased and proud to celebrate Khalid’s success in the Fikra University competition. To make it successfully through the various stages of the competition and to see your initial idea develop and come to fruition is an achievement one cherishes forever. It is always a pleasure to see CEN students earn acclaim for themselves, their work and their university all across the region.”

An AUS team comprising Ahmed Elrayes and Mohamed Hag Ali, both electrical engineering majors, and Nova Rahman, a computer science major, was among the shortlisted teams that made it to the final, along with Khalid and a team from the American University in Dubai.

The aim of the competition, run in collaboration with ADAC, is to promote and encourage entrepreneurship and innovation among university students in the UAE as well as to provide students with a platform where they can tackle challenges facing the aviation industry.