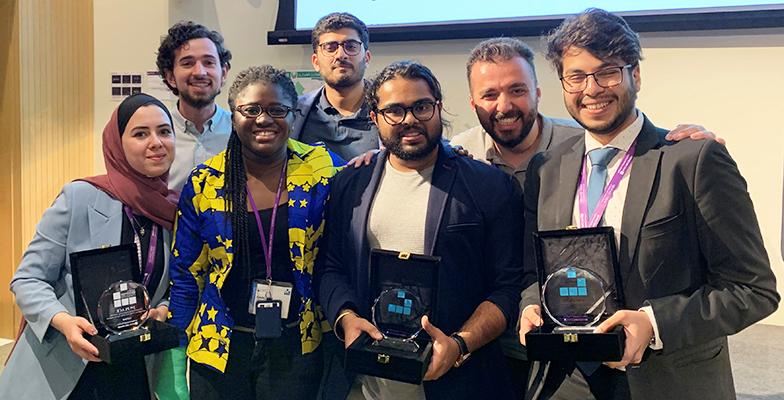 A team consisting of students from the Department of Computer Science and Engineering, students from American University of Sharjah (AUS) and other universities won second place at the 8th International NYUAD Hackathon 2019.

The three-day event explored the use of technology in diverse fields such as health, education, film, music, business and science for the purpose of social good in the Arab World.

Jayroop Ramesh and Vikram Sakkia, students from the Department of Computer Science and Engineering at the AUS College of Engineering, were part of a team that also comprised Rawand Deheliah from Al-Najah University in Palestine and Estelle Ocran from New York University Abu Dhabi. The team successfully developed “7aneen”, a smart mobile keyboard that helps Arabs communicate in Arabic script to preserve the language but type in “Arabizi”, which is writing Arabic in Latin characters and numerals on computer-mediated communication.

A large number of students from international universities such as MIT, Stanford, NYU, American University of Cairo, and Jordan University among others, took part in the competition. A total of 12 teams, each comprising four to eight members, competed and were mentored by members from industry and academia.

Dr. Fadi Aloul, Professor and Head of the Department of Computer Science and Engineering at the AUS College of Engineering, said:

“The future requires skills such as critical thinking, problem solving, teamwork and communication. Participating in hackathons allows the students practice to develop these skills as well network and establish contacts with people in academia, industry and government. The students’ participation also enhances their job prospects and opens doors to working in interdisciplinary fields.”