From Sharjah to Melbourne: How AUS helped an ambitious student scale the heights of academia in Australia | American University of Sharjah
Skip to main content
S 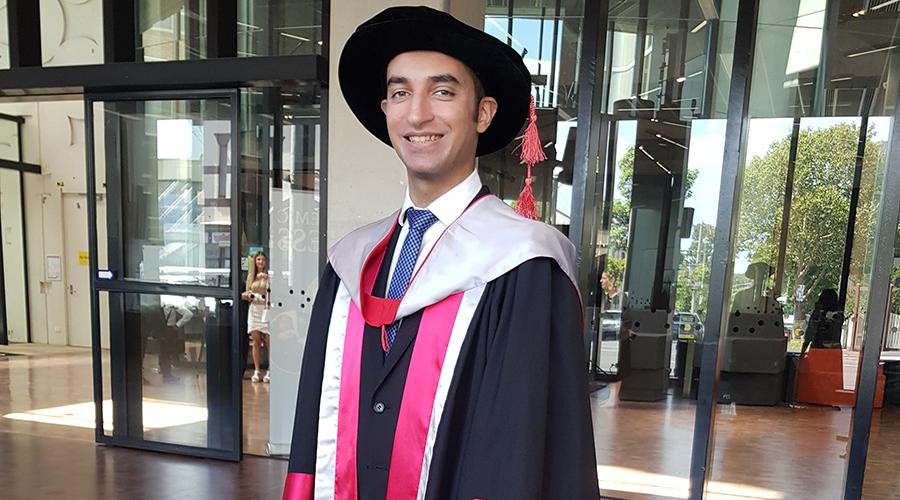 From Sharjah to Melbourne: How AUS helped an ambitious student scale the heights of academia in Australia

American University of Sharjah (AUS) continues its tradition of producing graduates ready to enter some of the world’s top-ranked graduate programs. AUS alumnus Dr. Ali Yasir Al-Attraqchi, who completed a Bachelor of Civil Engineering at AUS in 2013, has recently been awarded a PhD from the Swinburne University of Technology in Melbourne, Australia.

Dr. Al-Attraqchi followed his AUS education with a master’s degree in structural engineering at the University of New South Wales, Australia, which is ranked 44th in the world by QS World University Rankings. At that time, he secured an 18-month visa in Australia especially granted to engineers. AUS was one of the few universities from Middle East whose engineering graduates were eligible for such a visa.

Following the completion of his master’s degree, Dr. Al-Attraqchi was accepted into Swinburne University of Technology’s PhD program, where he investigated the use of concrete-filled steel tube columns as a viable solution for bridges in areas prone to seismic activity. The results of his thesis will allow engineers to make better risk-informed decisions in the construction of new seismic-resilient bridges, or in the retro-fitting of existing reinforced concrete bridges. His thesis conducted one of the first seismic tests of concrete-filled steel columns under combined horizontal and vertical ground motions.

Dr. Al-Attraqchi’s story echoes with many other AUS graduates who have gone on to master’s or PhD programs at prestigious universities around the globe, such as Harvard, Cambridge, Oxford and MIT, among many other notable institutions. Dr. Al-Attraqchi credits AUS’ accreditation with his ability to secure a position in Australian graduate programs.

“AUS’ ABET accreditation helped a lot with my degree recognition in Australia, which later allowed me to apply for permanent residency,” he said. ABET is the global accreditor of college and university programs in applied and natural science, computing, engineering and engineering technology. All of the undergraduate degree programs in the College of Engineering are accredited by their respective ABET commissions. AUS was the first university in the Gulf region and the second outside the United States to receive ABET accreditation.

As he continues on his academic and professional journey, Dr. Al-Attraqchi recognizes AUS as the foundation for his impressive achievements.

For more information on the degree programs offered by the AUS College of Engineering, please visit www.aus.edu/cen.