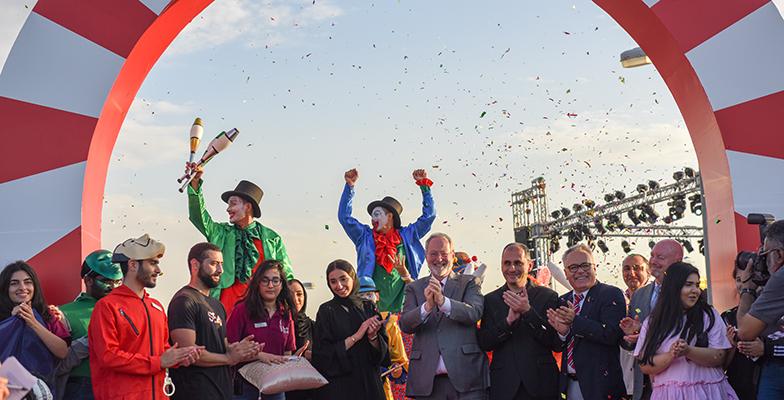 Fun and friendly competition at AUS Festival of Colleges

AUS students enjoyed a fun, educational and a friendly competition on November 20 at the Festival of Colleges, organized by the Student Council in collaboration with more than 30 AUS college organizations and interest-oriented clubs.

Each of the university's four colleges had designated zones to carry out a variety of activities ranging from the intellectual to the fun and creative. Interest-oriented clubs, college organizations and the Graduate Student Association also set up their booths within each of the college zones. Colleges showcased some of their work and carried out educational performances related to their programs.

The event also brought back some of AUS alumni who also carried out musical and magic performances at the event.

"This event is the first of its kind that catered to both colleges and interest-oriented clubs," said Maryam Khalid Al-Qassimi, President of the Student Council. “AUS usually organizes fantastic cultural activities, but this one was the first event to bring all members of the AUS community together. It fueled AUS the students' pride in their colleges. We wanted to create a bridge between all groups and colleges and we succeeded. Even faculty members attended and joined in with their families.”

A judging committee evaluated the performances and activities in each college before declaring the College of Arts and Sciences (CAS) the winners of the College Cup.

"CAS won because of their team work, creative games and activities that were relevant to the college's programs and the how they were received by the public. That's how they won the trophy. However, everyone was also amazing and did a fantastic job," said Al-Qassimi.