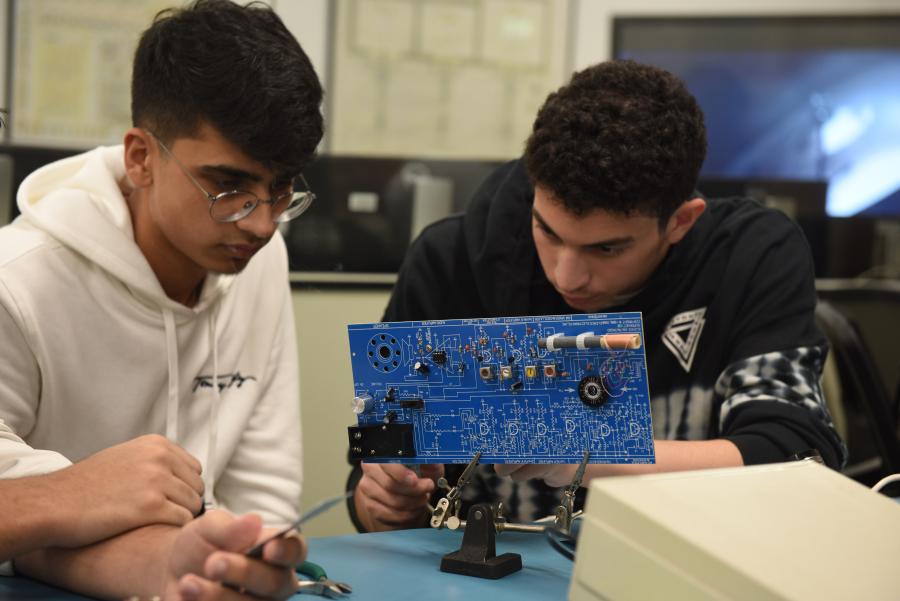 The Department of Electrical Engineering at American University of Sharjah (AUS) organized a hands-on boot camp for high school students to introduce them to the various exciting opportunities the field has to offer.

“We designed the boot camp so that students can get a glimpse of the applications of electrical engineering. Students were introduced to the applications of artificial intelligence (AI) in our work; learned about robotics, automation, microelectronics and how mobiles and microprocessors are made; and got a good understanding of the inner workings of smart and electric cars. They were also able to see how electrical and electronic devices are vital in the areas of neuroengineering and biomedical applications,” said Dr. Usman Tariq, Associate Professor in Electrical Engineering and chair of the boot camp organizing committee.

Students attended an AI and signals session where they saw examples of AUS student work on machine learning algorithms followed by practical experiments in the area of image recognition. “We train computers with algorithms based on mathematics and statistics to be able to perform tasks like humans, or even better, such as face recognition, speech generation and recognition, translation, image and object recognition and so on. Inputs to machine learning algorithms are digital signals, such as images, videos, speech signals, brain signals and so on. Signal processing is an integral part of electrical engineering, which is what students were able to witness and apply,” said Dr. Tariq.

In the session on robotics, students experienced AUS’ autonomous drone flight capabilities and then were tasked to build their own robots using standard kits. They also learned about how state-of-the-art tools can be used to visualize robot movements in 3D virtual environments.

Students also participated in a session on renewable energy where they were introduced to solar energy systems. “Market shares of electric cars and trains are increasing in the world and the UAE. The need for a secure and sustained electricity supply is essential to operate these systems, which is why it is important students understand the significance of these systems” said Dr. Tariq.

During the session on the Internet of Things, students had the opportunity to build their own AM and FM radios. They learned how signals are created and propagated using an antenna. In the bioengineering session, they learned about bioelectric signals and the primary functions of medical electronic systems.

“What I enjoyed most in the boot camp was the enthusiasm of all the professors. It was really contagious and got me excited about what they were sharing. It was also really interesting to see how math and physics came together in the work we were doing. I have always been interested in more theoretical aspects of mathematics and computer engineering, but this boot camp expanded my interests in the applications of physics,” said Yousef Mahalba, a grade 12 student from Kings’ School Al Barsha.

Fellow grade 12 student Lauren Hardcastle said the camp was eye-opening. She said: “I enjoyed the hands-on activities. There was a good mix in the teaching approach. I enjoyed the practical side as well and we got a really good understanding of what the field is like and the professors were really helpful. I never really considered electrical engineering before but this was eye-opening. It also showed me that if I decide to go into any area of engineering that they are all interlinked,” she said.

Student Ahmed Al Yasin said the boot camp was an opportunity to see more of what the campus had to offer. “I liked that we had access to the different features of the university, and I also enjoyed the variety of activities and hands-on experience. Electrical engineering is such a versatile field,” he said.

AUS offers a Bachelor of Science in Electrical Engineering. Through experiential and applied learning, the curriculum provides students with broad knowledge spanning all areas of electrical engineering, including electronics, communications, signal processing, robotics and autonomous systems, AI, power and renewable energy, satellite communications, biomedical applications, and much more. In project-based courses, students acquire the soft skills that enable them to become lifelong learners, independent critical thinkers, entrepreneurs and key team members. AUS is ranked among the top two (tied) in the UAE and top ​300 universities globally for ​electrical ​and electronic ​engineering, according to QS World University Subject Rankings (202​2​).

For more information about the Department of Electrical Engineering, visit www.aus.edu/cen/bsee