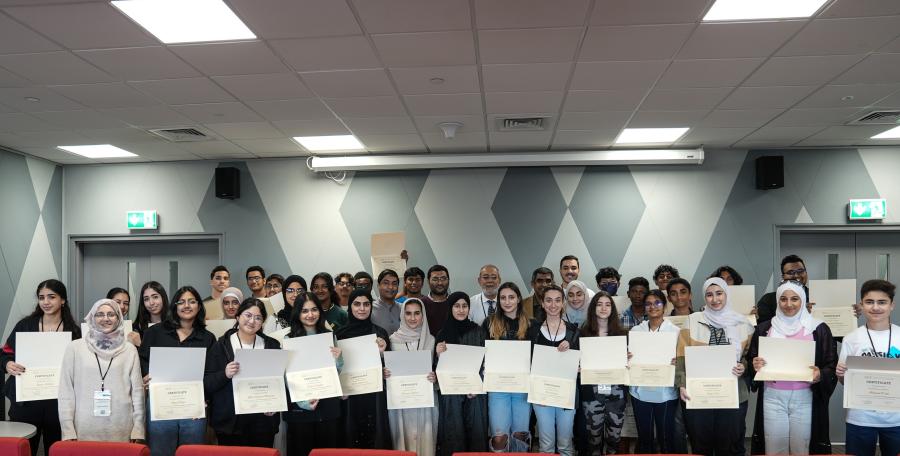 Intimately linked with chemistry, mathematics, physics and biology, chemical and biological engineering offers unparalleled opportunities to design, develop and operate industrial processes that significantly contribute to technological infrastructures in modern society. Thirty-five students from 29 high schools around the UAE explored possible career options in chemical and biological engineering at an exciting boot camp organized by the Department of Chemical and Biological Engineering at American University of Sharjah (AUS).

During the three-day event, students learned about some of the most significant industrial processes, including cooling towers, which are widely employed in several industries such as oil and gas, and food processing, and used in power plants to reject waste heat into the atmosphere. They also learned about pump stations and their significance in transporting liquids in chemical and biological processes. Students also observed the application of reverse osmosis, which is a leading desalination technology, where they witnessed the purification of salty water and tested its quality.

Students also enjoyed hands-on experiments including synthesizing soap using batch experiments and natural raw materials such as olive oil, coconut oil and almond oil; as well as synthesizing a common anti-inflammatory drug for pain and fever. During this session, students worked on developing their teamwork skills as they worked together in groups. They further experimented with adsorption by building a small-scale adsorption column that employed activated carbon to remove a dye pollutant from simulated wastewater. Adsorption is a conventional wastewater treatment process and represents an important unit operation in chemical engineering. They also learned about rotary drum vacuum filtration processes, which are used to separate solids from liquids, and performed hands-on experiments synthesizing hydrogel beads that have important applications in drug delivery, tissue engineering and the production of contact lenses.

“The boot camp is very valuable in helping students explore their future career options. Boot camps allow youth participation and introduce future generations to problem-solving and creativity in engineering. This boot camp is also an integral part of AUS’ social responsibility to engage with the community. It showed students the diverse set of industries they could work in and helped them develop necessary skills and technical expertise to understand what it takes to design and operate industrial processes that provide solutions to some of the most pressing challenges the world faces today in energy, health, food, agriculture and the environment,” said Dr. Sameer Al-Asheh, Professor and Head of the Department of Chemical and Biological Engineering in the College of Engineering.

Allia Andreia Mauleon, a grade 11 student at SABIS International School–Ruwais, said that what she enjoyed most about the boot camp was the experiments.

“The experiments were carefully chosen for students with different skill levels and were explained by the professors. Students were also given ample time to ask all their questions.  This boot camp enhanced my teamwork skills and increased my interest in chemical and biological engineering. In fact, I would consider it for the future because it has plenty of opportunities that spark my interest,” she said.

Ayah Jabr, a grade 12 student from American School of Creative Science, took the opportunity during the boot camp to learn more about the university and the program.

“As part of the boot camp, we got a tour of the AUS campus and we saw its facilities. It is beautiful.  Also, we had access to state-of-the-art laboratories when we were conducting the experiments. The machines used were highly advanced and the experiments we performed were engaging and taught us a lot about some of the most important applications of chemical and biological engineering. It was absolutely fun. This field is interesting, and I would consider it as a major. I got so much information because the professors were very welcoming and open to discuss and explain everything that has to do with the field, which gave us a lot to think about,” she said.

Chemical and biological engineering is a discipline that impacts numerous areas of technology by occupying a unique position at the interface between molecular sciences and engineering. AUS is ranked among the top two (tied) in the UAE and top ​350 universities globally for ​chemical ​engineering, according to QS World University Subject Rankings (202​2​).

The College of Engineering at AUS offers undergraduate and graduate degrees in chemical engineering. For more information, visit www.aus.edu/cen/bsche.