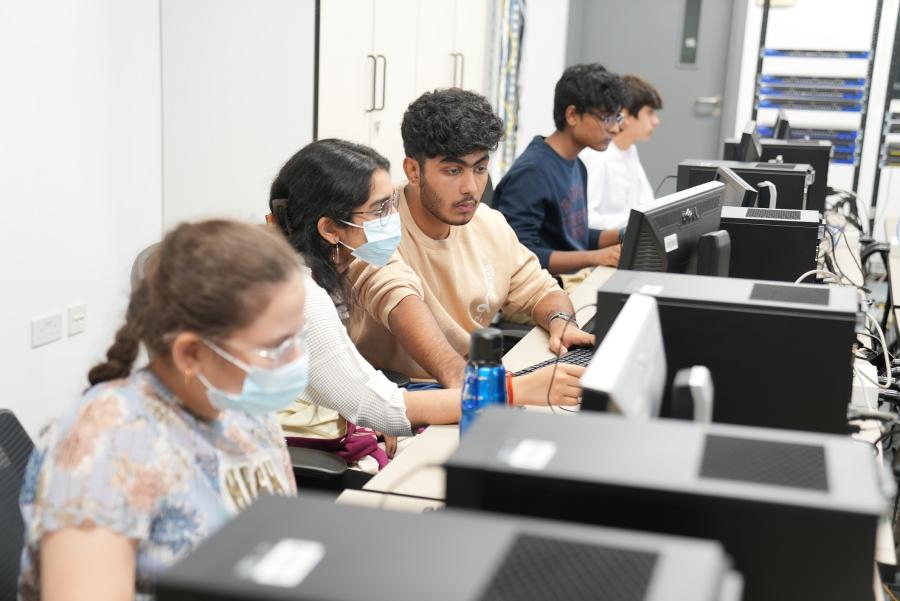 Building a computer network, writing code, developing games and programming Internet of Things (IoT) devices were some of many activities that students enjoyed during the 15th American University of Sharjah (AUS) High School Computing Camp.

Held in the College of Engineering’s (CEN) state-of-the-art laboratories, the computer camp was an engaging and educational event for students in grades 10-13, who experimented with the many subjects related to computer science and engineering. The selection process was highly competitive as 31 students from 12 schools were selected out of 250 applicants.

“Coding is an important skill to teach students from an early age. A good understanding of coding is the basis for learning most of the advanced technologies that we see nowadays, such as artificial intelligence, data science, mobile application development, IoT, web development and more. It also sharpens many of the essential soft skills because students are taught critical thinking, logic, problem-solving, patience and creativity,” said Dr. Imran Zualkernan, Professor in Computer Science and Engineering and Head of the Department of Computer Science and Engineering.

In the course of the computing camp, students learned the basics of building a computer network including the devices and protocols to use. They practiced building a Local Area Network (LAN) using switches and routers and learned about the different types of networks and connections. During the session on programming in Python, students were introduced to computer programming basics, including algorithms, variables, control and conditional statements and Loops, and developed codes to solve real-life problems. In the basics of building smart homes, students simulated the operation of monitoring and controlling a smart home environment through programming of IoT devices. At the end of the camp, students were introduced to the basics of game development and built simple games, learned basics of building mobile applications and developed a car parking tracking app, and had the opportunity to get hands-on practice in training artificial intelligence models to classify images, audio and more.

“Attending the computing camp at AUS was an incredible experience. The camp was well-organized, and it gave high school students like me a great opportunity to learn more about computer science and explore our interests in this area. During the camp, I had the chance to learn from experienced instructors and work on various projects that helped me develop my skills in computing. I was also able to meet other students who shared similar interests, which allowed us to exchange knowledge and build social connections,” said Abdulraheem Alharbawi, a grade 13 student at The Westminster School in Dubai.

Dhiresh Himthani, a grade 12 student at Delhi Private School in Sharjah, said the camp broadened his horizons and made him more interested in computer science and engineering.

“A truly insightful experience, one like none other with opportunities and experiences that opened my eyes to the enthralling world of computer science and engineering. A deeper understanding of this branch of study during this four-day camp with AUS enhanced my interest in the field and inspired me to consider an innovative future in computer science!” he said.

For more information on the Department of Computer Science and Engineering, visit www.aus.edu/cen/bscoe.