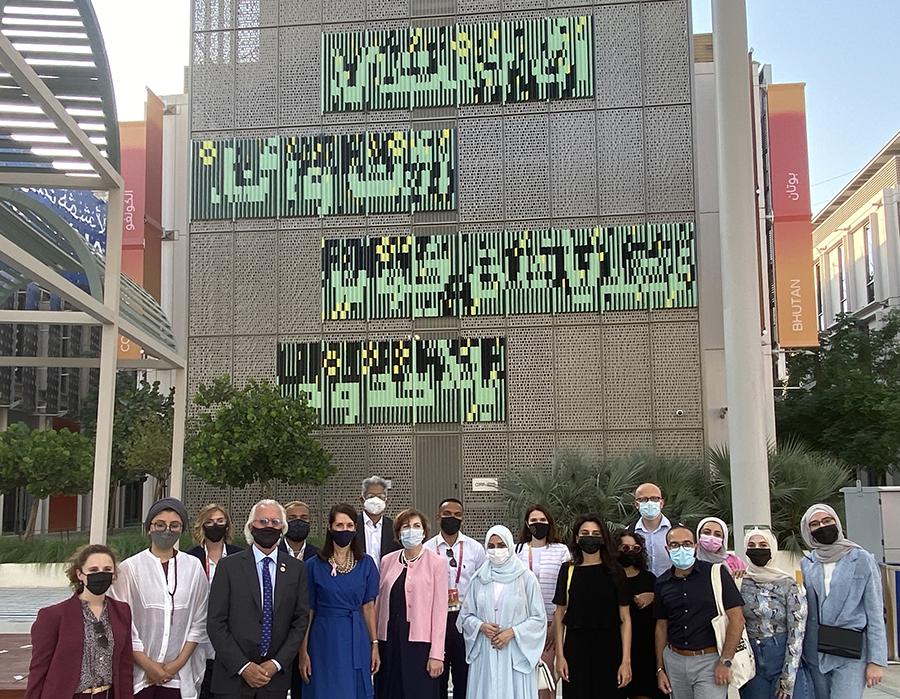 A giant 125 square-meter mural weighing approximately 500 kilograms created by UAE and USA-based established designers has been officially revealed at Expo 2020 Dubai, as a collaboration between American University of Sharjah (AUS) and the US Mission to the UAE.

AUS faculty Riem Ibrahim and Hala Al-Ani and architect Bishoy Girgis, along with Polish designer Marian Misiak, who led the project as co-designers, mentors and coordinators, and facilitated the 60-hour fabrication and construction process in the Al Dhaid, Sharjah, factory of StructurFlex Middle East Contractors. The mural comprises a series of 25 locally sourced galvanized iron sheets, each weighing 20 kilograms, hinging on a supporting frame.

Located in Expo 2020 Dubai’s Opportunity District, the mural is titled Lettering Large and celebrates themes of diversity, unity, coexistence, tolerance and limitless opportunities shared by the UAE and the United States.

Consul General Gregonis, said: “The U.S. Mission to the UAE is proud to support American University of Sharjah’s mural project at Expo 2020 Dubai, which promotes the USA Pavilion’s theme of ‘Life, Liberty, and the Pursuit of the Future.’  This project also exemplifies the U.S. Mission’s commitment to partnering with UAE’s top educational institutions to encourage innovation, collaboration, and exchange between the United States and the United Arab Emirates.”

Under the guidance and mentorship of a faculty and staff team from CAAD, visual communication and multimedia design students created the mural’s visual identity and its application in multiple channels, including the social media campaign and a marketing video.

AUS Chancellor Dr. Susan Mumm said: “To have been involved in a project of this scale at such a major global event as Expo 2020 Dubai is a significant achievement for the AUS community. We are grateful to the U.S. Mission in the UAE for supporting our team’s vision from concept to completion and for allowing AUS to showcase the skills of our students, alumni and faculty to the world in this way.”

As the project lead, AUS Assistant Professor in Visual Communication Riem Ibrahim said the greatest challenge was taking a two-dimensional text and translating it into a three-dimensional viewing experience in a way that unites both English and Arabic language audiences.

“The text provided by the very talented author Eman Al Yousef­—who happens to be a chemical engineering graduate from AUS­—speaks to the aspirational views of both the UAE and the USA for a future that pushes beyond the limits of our imagination. The lenticular effect captures this aspiration beautifully, providing a unique and dynamic viewing experience: the artwork changes as the viewer moves across until they are able to fully read the statement clearly and simultaneously in both languages,” said Ibrahim.

During Expo Dubai 2020, which runs through March 31, 2022, AUS will coordinate a series of workshops to share their process and design. A publication will also be developed by AUS design students to document the process, selection and fabrication of the mural.

The legacy of this initiative will extend beyond Expo 2020 Dubai when the artwork will be dismantled and then divided into seven separate sections as stand-alone murals for each of the seven emirates of the UAE, becoming public monuments enjoyed by UAE audiences for years to come.

Visitors can view Lettering Large at OA12, Opportunity District, opposite the Eqypt Pavilion, a five-minute walk from the USA Pavilion.

For more insights on the Lettering Large collaboration, follow @public.type on Instagram or visit www.aus.edu/lettering-large-expo-2020-dubai. For more information on the USA Pavilion, please visit www.usapavilion.org.