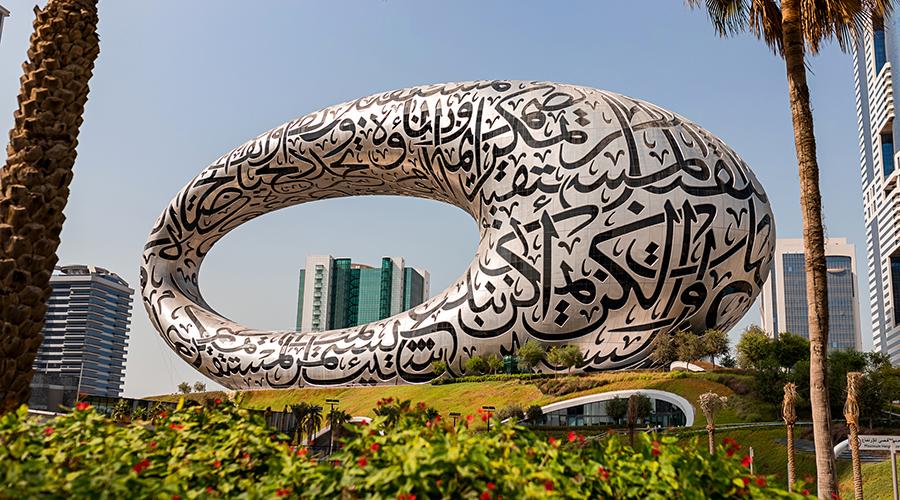 Meet the proud AUS graduates behind The Museum of the Future

Among the masses of those who celebrated the grand opening of The Museum of the Future (MOTF) in Dubai recently, were around 20 alumni from American University of Sharjah (AUS) who played their own part in realizing the vision for the launch of this inspiring new institution.

Proud AUS-educated architects, engineers, finance and accounting experts, project managers and communications professionals were behind the museum’s design and construction, as well as the development of the visitor experience, administration and promotion.

Working for Killa Design—the architectural firm responsible for the stunning design of the torus-shaped museum and its illuminated calligraphy embellishments—AUS alumna Maryam Hosny has spent the past three years as a member of the site team that oversaw the realization of the building.

“I joined the site team just as the museum’s structural diagrid framework was on its way to completion and the finishes were just starting. Working on such a complex building, all finishes required hands-on detailing and coordination as each had bespoke characteristics and obstacles,” said Hosny.

As a graduate of AUS’s acclaimed College of Architecture, Art and Design (CAAD), Hosny said the skills she gained during her studies helped her succeed as part of the project team.

“In construction, building a complex structure such as this one always presents constraints and limitations, however at CAAD I learned to push through and work with such limitations in order to make the best of the situation, rather than allowing them to hinder me,” she said.

After being so invested in the project, Hosny looks forward to visitors appreciating the grandeur of the spaces and details, and is eager to receive feedback about their experience of the museum.

The Museum of the Future is administered by the Dubai Future Foundation (DFF), which is a prominent employer of AUS graduates across a wide range of professions. As Senior Social Media Executive at DFF, Inas Dabdoub’s expertise in both business and design, which she first gained through her design management studies at AUS, has well-equipped her for this experience of a lifetime.

Dabdoub managed the social media accounts of the Museum of the Future for opening night, and was also responsible for creating the hype and excitement among global audiences before, during and after the grand opening via the DFF’s own social media channels.

“The most exciting and challenging part of my role was sharing content about the museum that allowed people from all over the world and in different time zones to watch the live opening and stay up-to-date with the museum's breathtaking experience,” she said.
Dabdoub said the opportunities AUS provided through her multidisciplinary studies led her to this point.

“My major studies in design management at CAAD gave me better insight into Dubai Future Foundation’s brand presence on digital platforms so I can communicate about it effectively and maintain relationships with our digital community; the translation courses I took through the College of Arts and Sciences equipped me to manage English and Arabic content, and the marketing courses I took through the School of Business Administration led me to a career in digital marketing,” she said.
Being part of the opening of the Museum of the Future was a dream come true for Dabdoub.

“I’m extremely proud. The museum is a great addition to Dubai's skyline and an experience that the whole world needs to explore to see how they can become a part of shaping the future,” said Dabdoub.

For more information about how American University of Sharjah is equipping students to make an impact on the region and the world, visit www.aus.edu.