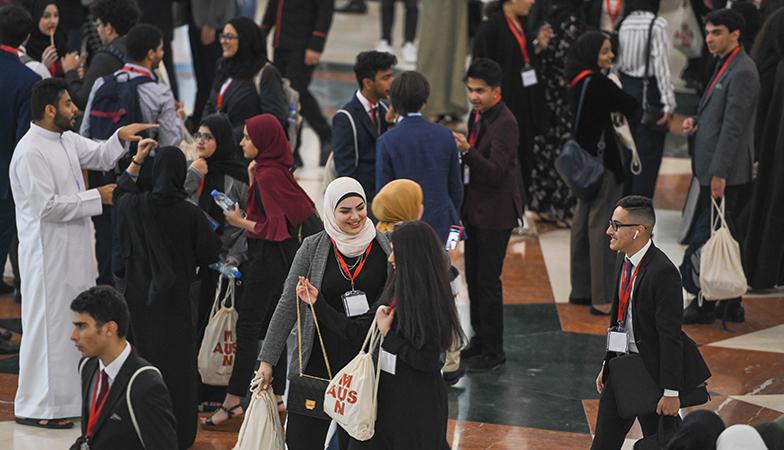 More than 1,400 students from all around the country gathered at American University of Sharjah (AUS) to learn about global trends, diplomacy, and the mechanics behind the United Nations at the 13th AUS Model United Nations (AUSMUN) conference held at the university’s campus February 13—15, 2020. The theme of this year’s conference was “Embracing Diversity, Shaping the Future.”

During the three-day event, students from more than 60 universities and schools from across the UAE honed their communication, research, diplomacy, negotiation, teamwork, and public speaking skills, and networked with like-minded individuals.

Speaking about the importance and evolution of AUSMUN, Muaaz Adra, Secretary-General of this year’s event, said:

“Being in a region that has a heavy focus on the youth, AUSMUN has been a pioneer in the field of empowerment and the youth. Throughout the years, our conference has grown at a dramatic rate. This year we had more than 2,500 applicants who wished to be part of our conference. We are extremely excited to see the future generations taking on leadership experiences from a young age.”

“The Arabic committee is a unique addition to MUNs in general and AUSMUN in specific. We’re in a way trying to reach a bigger audience and include students who speak Arabic only. I believe it’s an effective and entertaining way to get educated about the mechanisms in which the UN functions and how international organizations are formulated. We need Arab speaking leaders and diplomats and it’s on us to make that happen.”

Another distinct aspect of the event which set it apart from other previously held conferences was its aim to support the university’s sustainability drive. The conference this year used an online platform – developed specifically for AUSMUN 2020 – for note passing and note-taking, thereby greatly reducing paper usage and wastage.

Participants keen to pursue a career in law were also introduced to the International Court of Justice (ICJ), providing them with a close simulation of the way the courts function.

The opening ceremony was attended by senior university officials who welcomed the participants to the campus. The ceremony also included a wonderful performance by the AUS Women’s Choir and a keynote address by Rahaf Al Saif, UN Youth Goodwill Ambassador.