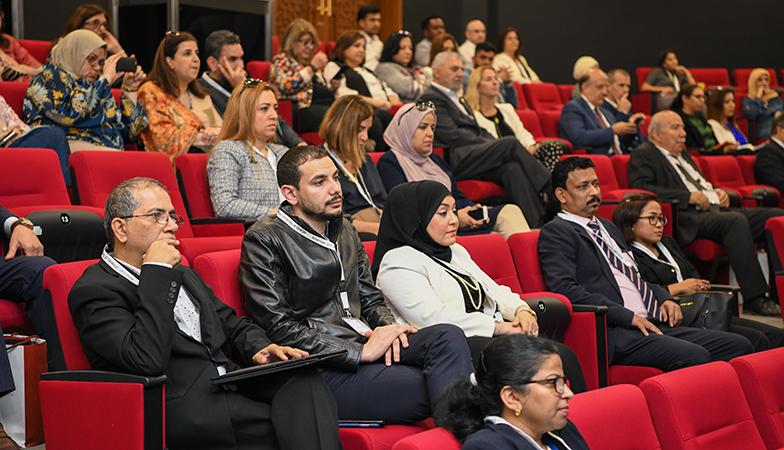 Principals and counselors from Sharakah schools honored at AUS

As part of American University of Sharjah’s (AUS) engagement with high schools across the UAE, the university held a special event entitled Principals’ and Counselors’ Appreciation Day to recognize schools that are part of the AUS Sharakah Program.

The event brought together 47 Sharakah and guest schools from various emirates. The Sharakah Program, a partnership initiated by the AUS Office of Enrollment Management between AUS and select high schools, currently has more than 70 schools enrolled in the program. It aims to support the university’s strategic initiative to create a platform for cooperation in various academic and non-academic areas. These include the engagement of teachers and students through training sessions, workshops, as well as cultural, social and sporting activities.

In his welcoming remarks, Ali Shuhaimy, Executive Director of Enrollment Management at AUS, thanked the schools for their partnership. He said: “For the past many years, this program has provided a platform for collaboratively supporting your students’ educational and extra-curricular activities. With the support of the schools, the university has been organizing multiple competitions covering various disciplines every year to enrich the students’ experience and to give them the opportunity to exhibit their talents. The events have always resonated well with the students, which in turn have encouraged us to keep building on the success.”

He added: “Since its inception, AUS has always recognized the importance of academic excellence. Therefore, we have always aimed to enroll well-qualified students. This required close cooperation and collaboration with schools, which culminated in the introduction of the Sharkah (partnership) Program.”

Highlighting the importance of the program for the school students, Agnes Shaw, Principal of the RAK American Academy, said that while the school joined the program only last year, it has proven hugely successful. “The program has had a great impact on the students who participated in many of the university’s events. Our students have been very active and have really enjoyed their time here.”

She added: “We have made three school visits to the university thus far. AUS also participated in our career event. We look forward to working with AUS in supporting the work we are doing in our ICAP program, which aims to help students with their choices after school as well as engaging the parents. We carry out assessment tests, university campus visits, internships and so on, and we would like to get AUS’ support with testing preparation for students.”

Academic counselling and advising, activities and exhibitions, as well as scholarships and financial aid are some of the great benefits provided by the Sharakah Program, according to Ibrahim Baraka, Principal of Al-Shola Private School in Sharjah. He said: “This initiative is a beneficial step for both parties: the schools and AUS. It is a real sharaka (partnership) that aims to help and assist students, especially at this critical transitional stage from school to university.”

He added: “Academic counselling and advising helps the students in getting to know the majors the university offers, making the process of choosing a major easier for them; activities and exhibitions such as the IT exhibition and athletic activities like the marathons organized by AUS give our students better access to university students and faculty to ask them questions, while the scholarships and financial aid provides the students with a chance to study at AUS.”

For Adnan Abbas, Assistant Director General of Al-Nahda National Schools in Abu Dhabi, scholarships and financial aid for students are one of the highlights of the Sharakah Program. According to Abbas: “We have been a member of the program since its very inception. Academic collaboration, workshops for teachers, programs for students, and most importantly, the scholarships offered have been the highpoints of this partnership.”

The AUS endowed scholarships fund, valued at AED 80 million, sees merit scholarships and need-based financial grants benefiting approximately two-thirds of all AUS students each year. Scholarships are available to all students, regardless of race, color, gender, religion or national origin. Currently, more than 1,323 students from Sharakah schools are benefitting from AUS scholarships.

Mohammed Sultan, Principal of the Sharjah American International School (Dubai Branch), said that its students have been enrolling at AUS for a number of years. He said: “The school has been part of the Sharakah Program for six or seven years now and it has been a fruitful relationship. Our students have been participating in all of AUS’s open days and activities. Most recently more than 85 students from our school participated in the AUS Model Congress that was held for three days on campus. Participation was not limited to students in grades nine to 12, but also involved students in grades seven and eight.”

Sultan added: “Our school even uses the university facilities for its graduations and other events. Also, AUS has been updating us about the performance of our former students, whom we have surveyed as well to get their feedback about their experience at AUS. So it’s been a mutually beneficial relationship.”

The principals and counselors were also provided with an overview about upcoming Sharakah events in the coming year including English Day; Biology, Chemistry and Environmental Science Day; Sharakah Sports Festival, Physics Open Day, Math Fest, Boot Camp on Robotics and many more.

Certificates of appreciation were distributed at the end of the event to all schools.