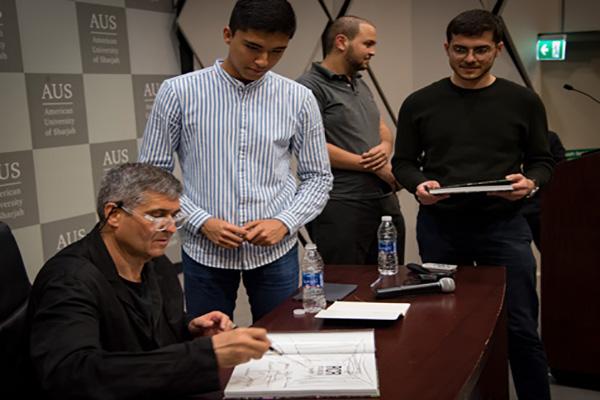 The College of Architecture, Art and Design hosted a lecture by Rafael Aranda, a partner in the 2017 Pritzker Prize winning Spanish practice RCR Arquitectes.

On April 13, 2018, in his talk, Aranda described the decision of he and his partners—Carme Pigem and Ramon Vilalta—to return after their studies to their hometown, Olot in rural Spain, as having had a deep impact on their working methods and design approach; most importantly, it branded in their practice the importance of response to context. The firm is still based in Olot today.

Context analysis, Aranda said, is not limited to the inspection of the physical attributes of a plot of land; it also requires understanding local cultures, practices and sensibilities. He demonstrated in depth how several RCR projects reflect this kind of understanding. Furthermore, these projects use a single material in different “registers” resulting in a “richness of simplicity.”

The other focus of Aranda’s talk was what he termed “shared creativity.” He highlighted the importance and effectiveness of collaborative thinking and designing. He related how he and his partners literally work across the table from each other. He referred to them as friends first and partners second.

Aranda’s talk elicited a positive response from the audience, which appreciated his deep insights into RCR’s approaches to design. Students from second- through fifth-year took away ideas about materials used in different registers, sensitivity to cultures, and respect for the environment.

When asked about RCR’s work in Dubai, Aranda said that the Dar Al Marefa School project has required an understanding of the local culture along with the needs of students and teachers, all the while addressing environmental factors such as heat, sunlight and wind flow.

Ultimately, the talk gave the audience a peek into the realities of a professional practice that does not compromise the integrity of design.

The Pritzker Prize for Architecture is one of the world's top prizes in architecture. It is awarded annually to a living architect or architects for significant achievement, and has been called “architecture’s Nobel Prize.”