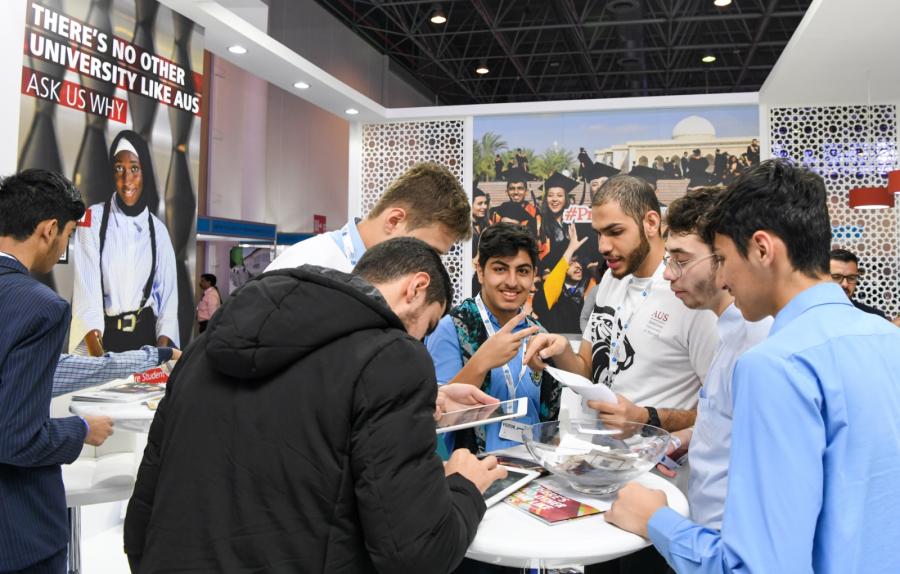 This week, admissions and scholarship advisors, along with faculty and students, from American University of Sharjah (AUS) will be meeting with prospective students and their families at the 16th International Education Show in Sharjah from January 22 to 24. The show is hailed as the most popular higher education event in the region, attracting more than 22,000 visitors at a pinnacle time for high schoolers as they consider what is next in their studies and future careers.

First-year AUS students Rohan Mitra and Mahira Pathan remember well the tension of the last few months of high school. Both students achieved outstanding academic results in their high school studies in Dubai, which led both to receive a 100 percent scholarship through the Sharakah scholarship program at AUS.

The Sharakah School Scholarship is a highly a competitive scholarship awarded each year to students from AUS partner schools throughout the UAE. Recipients are awarded between 50 to 100 percent remission on tuition and on-campus housing.

In addition to this, AUS offers up to AED 80 million in merit- and need-based scholarships to both first-year students like Mitra and Patha, as well as continuing AUS students such as Mariama M.M. Kah and Karim Nagy Hamid.

An award-winning senior architecture student, Kah came to AUS from the United States specifically for the chance to study at the university’s internationally acclaimed College of Architecture, Art and Design. Kah has consistently received merit scholarships for her academic achievement, placing her on the Chancellor’s and Dean’s lists.

Hamid is the recipient of an AUS athletic scholarship, which covers up to 25 percent of his studies as a senior civil engineering student while he holds the position of striker on the AUS football team, The Leopards.

In Fall 2019, almost 70 percent of first-year students at AUS received a merit scholarship covering between 20 to 50 percent of tuition and lab fees, for achieving an average of 90 percent on their final high school results. For many of these students, institutional reputation and scholarship opportunities were the main deciding factors on where they would study.

Consistently achieving straight-As throughout high school and ranking first in the UAE for business studies and travel and tourism studies, Mitra had his sights set on AUS and had the support of his family to pursue his studies there.

“AUS has a reputation for having the highest quality courses and opportunities in a wide range of fields. For me, AUS was always my top choice,” he said.

“When an AUS admissions team came to my school and told me about the scholarship opportunities that could be available to me because of my grades, I was very eager to apply. Once I submitted my papers, the scholarships office contacted me and advised that I was eligible for a 50 percent scholarship but that I should also consider applying for the 100 percent Sharakah Schools Scholarship,” said Mitra.

“I actually found out I had won the scholarship before my A-level grades came out, so it was more than just my academic grades that counted—it was my extracurricular experience and my personal development that counted, too,” he said.

“The idea of studying at university is daunting for any student. For me, receiving this scholarship gave me confidence that I can do this. This scholarship showed me that it wasn’t just me that wanted to study at AUS, but AUS wants me, too,” he said.

Mitra is now studying a double major in computer science and mathematics, and is also looking forward to the opportunity to be part of the Student Council and well as take elective courses in public speaking, debate and artificial intelligence (AI) as part of AUS’s liberal arts curriculum, which allows students to study a breadth of subjects while pursuing their major of choice.

“Since 10th grade, I have known that finances were tight for my family so I was very aware that I only had one shot at doing well in school in the hope of getting a scholarship,” she said.

“When I received the call from the scholarship office, I couldn’t believe it! It was a few days before my birthday—the best birthday gift ever! It was like a miracle,” she said.

“To be honest, this scholarship changes everything for me and my family. Without it, I would have had to take a break until we could save enough for me to go to university. My hard work has paid off, and I am so grateful,” said Pathan.

“AUS is well-known as a prestigious university, and alumni have a great reputation—that when you go in, you come out better than expected. It’s an incredible opportunity to be an AUS student,” she said.

Pathan is studying a Bachelor of Science in Computer Science in the AUS College of Engineering, but also has a passion for art.

“I am hoping to use some of my free electives to take a painting course offered by the College of Architecture, Art and Design. These opportunities matter a lot for personal development, and I’m glad I get to take advantage of them,” she said.

Pathan lives on campus in the university’s residentials halls along with one-third of all AUS undergraduate students. The residential halls include separate and secure accommodation for both male and female full-time students, with the opportunity to share or have a private room.

“For me, living on campus means that AUS has become a world of my own. I have experienced such a welcoming culture,” she said.

To prospective students, Mitra and Pathan have similar advice:

“Very simply, hard work pays off. Nothing should hold you back. You need to be focused and persistent from the very beginning. That’s what makes your profile stand out,” said Pathan.

“Focus on your exams and do well, but also make sure you’re doing more than academics. Look for ways that you can grow,” said Mitra.

AUS staff, students and faculty will be available at Expo Sharjah this week to discuss the wide range of undergraduate and graduate opportunities available for students seeking to apply for Fall 2020 admission.