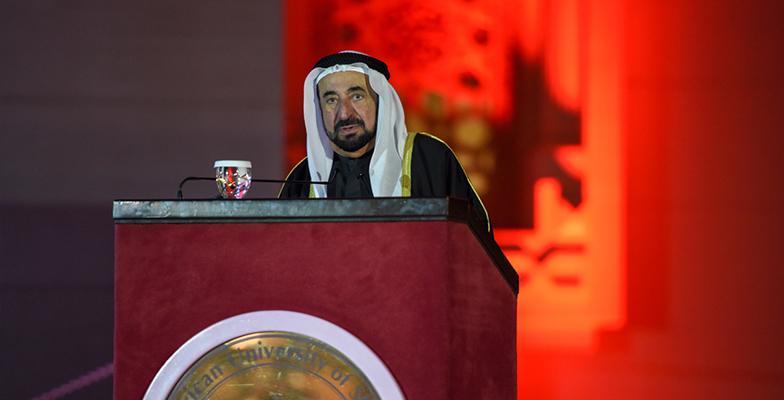 Addressing the gathering which comprised senior university officials, prominent business leaders and hundreds of AUS alumni from all across the country, the Sharjah Ruler said that the first theme of the university’s strategic plan focused on enriching the university experience and academic performance, the second on achieving sustainability and protecting the environment, the third on strengthening social connections and establishing partnerships, and the fourth on supporting scientific research through the establishment of the Sharjah Research, Technology and Innovation Park.

His Highness also noted that the university’s needs were being closely followed-up by special committees established to ensure that students receive the education that hones their skills and shapes their personalities and the services that guarantee their comfort.

Speaking to the alumni present on the occasion, the Ruler of Sharjah said:

“I call upon you the way a parent would to continue to excel as we have always seen you do. Your studies are over and you have received your degrees, yet here you are. You are the fruit of our work and your roots are here. This is why we want you to be our ambassadors to the outside world and to maintain your great reputation. I want to wish you all the best as you continue on the path you have chosen for yourself and also call upon you to come back to pursue your graduate studies here at AUS.”

During his welcome remarks, AUS Chancellor Dr. Björn Kjerfve thanked His Highness for his extraordinary vision in creating an institution of excellence that is well underway to becoming a research university. He said:

“Over the next few years, the research institutes and centers will require the hiring of more than 100 research professors and scientists, more than 200 technical and support staff, and some 700 graduate research assistants. They will study in offices and labs on campus; they will be working with industrial partners in the Sharjah Research, Technology and Innovation Park; and they will spend time doing research at leading universities around the world for at least a semester, while finishing their AUS PhD degrees.

“Consider how AUS can continue to help you develop your career and take advantage of the opportunities on offer. And while you consider what you can gain from being an AUS alumni, also please consider what you can give back to AUS, your alma mater. I encourage you to make donations to the AUS Endowment fund to sponsor students who follow in your footsteps.”

Under this year’s theme, #togetherwegrowstronger, the Office of Advancement and Alumni Affairs (OAAA) announced to the entire AUS community the Bidding for Good initiative, launched in the form of an online car auction for a brand new BMW 318i series. All proceeds raised in the auction will go into the Alumni Giving Student Scholarship Fund, the first in the history of AUS established for the purpose of raising funds to support deserving students.

Charles A. Diab, Executive Director of Advancement and Alumni Affairs, praised the connection between the alumni as they gathered by the hundreds to meet each other at the AUS plaza:

“Your personal identity is formed by the groups to which you belong and as AUS alumni, you share a sense of identity and community.”

Diab also expressed his gratitude to the alumni who contributed to the Alumni Giving Student Scholarship Fund:

“Being the first group of alumni to contribute around AED 123,000 to this fund, you have a huge responsibility of setting the pace for your fellow alumni. You are our strongest ambassadors, both locally and internationally. We take up this challenge together with you because ‘Together We Grow Stronger’.”

During the evening, His Highness Sheikh Dr. Sultan was also presented with a calligraphic 3D artwork of a book bearing a quote that was taken from his speech during one of the previous Alumni Reunion Dinners.

The AUS Alumni Association (AUSAA) President Ahmed Al Reyami also addressed his fellow graduates, encouraging them to be active in the AUS community, by contributing their time and efforts towards the many areas that influence and impact the university. He said:

“With your help, we will continue to innovate at AUS, to assure that our future alumni, like you, receive an outstanding education so that they can make a difference in their world. As alumni, you represent much of all that is good and great about our university, your accomplishments, your future achievements, the way in which you live, and the values by which you live reflect upon the educational values of AUS.”

During the dinner, a spectacular light show was projected onto the AUS Main Building and the evening included raffle draws for prizes contributed by Air Arabia and Akbar Holidays, and a performance by renowned stand-up comedian Ali Al Sayed.