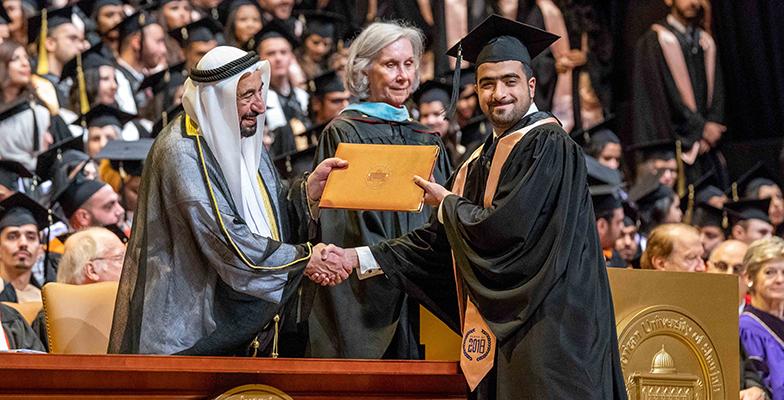 A total of 610 students graduated in various majors offered by the university at the undergraduate and graduate levels.

During his address, His Highness the Ruler of Sharjah, congratulated the graduates on their special day. His Highness also spoke about the next phase of AUS’s development as it establishes itself as a research university:

“I am delighted to inform you that the development of education and research at American University of Sharjah is progressing at a steady pace. After succeeding in developing a comprehensive and advanced university curriculum, AUS has now started to implement stages to transform itself into a comprehensive research university while preserving the high academic standards of its various programs.”

Elaborating on this, His Highness spoke of the new research institutes at established at the university:

Concluding his speech, Sheikh Dr. Sultan urged the new alumni to remain connected to their alma mater. He said:

“As for you dear graduates, I call upon you to maintain contact with your alma mater and to interact with AUS in its efforts to become a research university and to support it so that it achieves its objectives.”

In his opening remarks, AUS Chancellor Dr. Björn Kjerfve conveyed his congratulations to the students on their achievement. Dr. Kjerfve also spoke about the university’s focus on research and innovation:

“We are taking an established, 20-year-old liberal arts-based university, focused on teaching and learning, and consolidating its fine reputation and influence, by also developing a strong research branch, which we hope will have a positive impact on people’s lives, regionally and around the world. We have established four inter-disciplinary research institutes that will each offer a PhD program. In addition, we have set up 2 research support centers, where high-performance computing and analysis will be scaled to support the institutes and research on campus.”

The chancellor also mentioned the university’s plan to address critical global issues in health sciences, new materials, smart cities, and the effects of climate change on the environment. Speaking about the university’s graduate programs and the resources AUS plans to put in place to achieve its vision of becoming a premier research university, he said:

“Once the PhD programs are underway, we plan to recruit some 700 doctoral research assistants. We will hire more than 100 research-focused faculty to lead the research effort and to teach science, technology, engineering and math – the STEM subjects critical to the progress of society. We will invite researchers and post-doctoral students too, who will help us build and establish AUS – your alma mater – as a world-class research university.”

During the ceremony, His Highness the Ruler of Sharjah also conferred the honorary title of Professor Emeritus for Dr. Ali Sayfy and Professor Emerita for Dr. Fatima Badry.

The breakdown of the Class of Spring 2018 is as follows:

A breakdown of the graduating class by college/school is as follows:

College of Architecture, Art and Design: 90 undergraduate and 7 graduate

College of Arts and Sciences: 83 undergraduate and 6 graduate

College of Engineering: 223 undergraduate and 32 graduate

In her address, student speaker Alya AlHazami, an international studies major, spoke of this being the Year of Zayed and said:

"This country was built on the notion of using one’s privilege for the wellbeing of others. Our founding father, Sheikh Zayed Al Nahyan, may he rest in peace, made sure to emphasize the responsibility educated people have. The UAE government has announced 2018 to be the Year of Zayed. It commemorates his legacy and the values he stood for. With our degree, we have the opportunity to add to his legacy. With the degrees we earned, we are now part of the 6.7 percent of the world’s college degree holders. We need to refuse being just numbers and actively take charge to make a difference with our education. While our degrees can be a tool to get us ahead in life, they can also be used as a means to assist those who are not as privileged. It is up to us to make the best of the teachings of AUS by using education as a tool to enrich our lives as directed by its president, Sheikh Dr. Sultan bin Muhammad Al Qasimi."

Yousuf K. Y. Aborahama, graduating with a degree in electrical engineering, was declared the recipient of the President's Cup for achieving the highest grade point average while Fatima Jasim Alshamsi, a visual communication major, received the Chancellor's Cup for exhibiting an outstanding combination of academic excellence, general character and service to university.

To commemorate the commencement, on behalf of the graduating Class of Spring 2018, Dr. Kjerfve presented the Sharjah Ruler with an artwork composed of recycled materials entitled Elemental by student Mohamed Rowaizak.

Founded in 1997, AUS has fulfilled His Highness Dr. Sheikh Sultan's vision of a quality institution catering to the aspirations and needs of the UAE and the wider Gulf community as a whole. Over the past decade, the student body increased considerably, necessitating the launch of two graduation ceremonies per year.