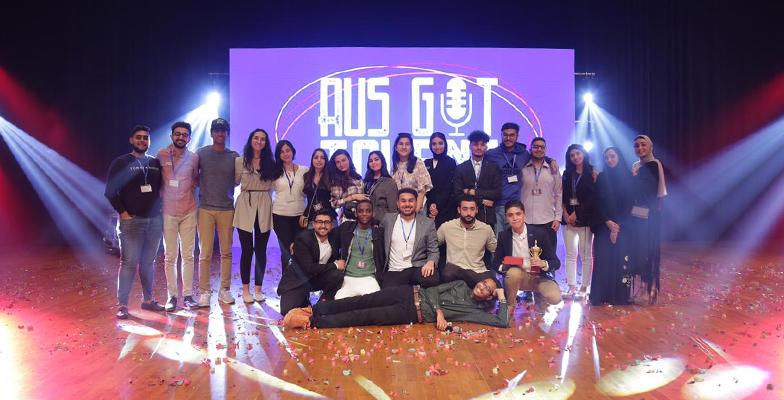 AUS Got Talent 2019 was held at American University of Sharjah on March 11 and was organized by the AUS Student Council, in collaboration with the Power Hit Radio (PHR) Club and hosted in the Main Auditorium. The show aimed to uncover unique talent within the AUS Community and offered students a huge platform to showcase their talents and gain performing experience.

What made AUS Got Talent 2019 standout from other events was the collaboration with the Office of Alumni Affairs, creating a culture of giving back to the AUS community by which all proceeds of ticket sales went into the AUS Student Support Fund.

The diversity of talent ranging from singers to illusionists and voice imitators was very interesting. This was made possible through the audition screening process where 15 final performers were shortlisted. The auditions allowed the Student Council and PHR to select not only talented performers, but also those that were creative, original and exhibited stage presence. And the finalists did not disappoint.

The judges included AUS Alumni Ibby VK and Basel Debal from De3bal. Having notable Alumni back in AUS for this event was an amazing opportunity to support young talent and recruit budding artists. It was inspiring to witness the journeys of Ibby VK and De3bal who are creating a storm in the music industry.

“It was one of the best days in my life,” said Alhendi. “I never imagined how far I could go with my hobby of imitating people and characters. However, with the support of fantastic people at AUS, it gave me enough faith and pride in my abilities, making my dreams come true. Winning AUS Got Talent 2019 is a successful start, and hopefully more is yet to come!”

The three winners were selected based on the audience vote and judges’ decision.