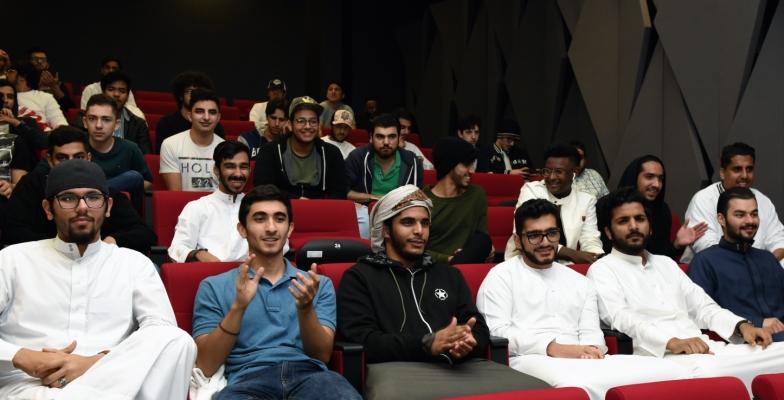 Ali Shuhaimy, Executive Director of Enrollment Management at AUS, welcomed students and instructors to the ceremony and said:

“I am happy to be standing in front of the Achievement Academy students at the end of each semester to congratulate them and their instructors. This fall the AABP students were able to take math and physics placement tests before the semester had started which would allow them to register for the 100-level math and physics credit courses while registered in the AABP.”

Jessica March, the Director of the Achievement Academy said in her opening speech:

“This is a great day for me; we have this ceremony because we get the chance to thank you for all of the hard work that you put in. I know a lot of you had many questions at the beginning of the semester, a lot of anxiety, and hopefully you have reached the end and achieved your goals.”

March highlighted the great development of the program over the last 20 years. A picture collage that included pictures of former instructors, directors, and students was shown to mark the 20-year anniversary of the program.

Tahani Qadri, senior instructor and coordinator of the ceremony said:

“The theme of the event was 20 years of ongoing development. The ceremony told a story of a pleasant and positive learning environment and showcased instructors who gave heartfelt support and recognition to their students and featured our talented students in various aspects of their lives both academic and extracurricular. Instructors and guests alike enjoyed the relaxing ambience and the excitement exhibited by the students.”

The AABP improves student readiness for enrollment into their majors and for the rigors of an academic program of study in higher education. In addition to helping students improve their English language skills, the program also helps students prepare for university math and physics courses, and enhances students' personal, academic and study skills to maximize the likelihood of success in their university experience.