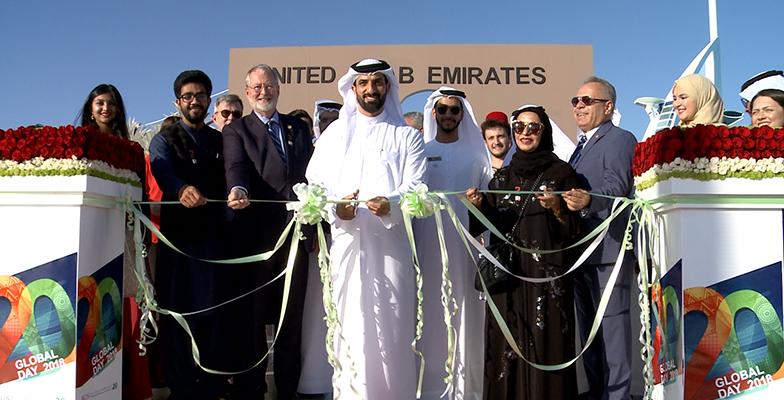 Held under the patronage of His Highness Sheikh Dr. Sultan bin Muhammad Al Qasimi, Supreme Council Member, Ruler of Sharjah and President of American University of Sharjah (AUS), the university kicked off its annual Global Day on March 15. As one of the most anticipated events at AUS, this year’s Global Day was inaugurated by Sheikh Sultan bin Ahmed Al Qasimi, Chairman of Sharjah Media Council. The opening was also attended by Dr. Björn Kjerfve, AUS Chancellor; Dr. Moza Al Shehhi, Dean of Students; along with other senior university officials, faculty, staff, and students.

“I hope success for the Global Day which aims at highlighting cultural diversity and highlighting the various cultures of the AUS students who come from 95 different nationalities. In fact, it is also a testimony that the UAE in general and Sharjah in particular, is a country of tolerance and openness to the other and likes to attract other nationalities,” said Sheikh Sultan bin Ahmed in a statement after the ceremony.

Each year, the event showcases the cultural heritage of the many nationalities represented at AUS by turning the university campus into a festival of culture and color. This year ethnic stalls and pavilions depicting the cultural heritage of 33 countries – including the UAE, Iraq, Nigeria, Turkey, Kenya, Palestine, Brazil, Algeria, among many others – were set up across the Main Plaza, giving visitors a taste of the truly multicultural nature of the AUS campus. Thousands of visitors who attended the event on Thursday and Friday also sampled a wide variety of traditional food available in the outdoor food court.

Organized by the Office of Student Affairs with the assistance of AUS students, the two-day event also included cultural performances held in the university’s Main Auditorium as well as on an outdoor stage, giving students a chance to share their talent and traditions through dance performances and skits.

Speaking about the event and the students’ involvement in it, Dr. Al Shehhi said:

“We are celebrating a milestone anniversary this year with the 20th Annual Global Day, a special occasion that continues to promote the cultural diversity and unity of the students at AUS. Our students are extremely creative in bringing their ideas and concepts to life at this special two-day event. Their enthusiasm is evident in the spectacular cultural performances for which they have worked very hard for the past couple of months.

“It is important for our students to apply their academic knowledge outside the classroom and learn practical skills for their personal and professional growth and development. Global Day is a platform wherein our students learn the challenges of managing a project of this magnitude, working with their peers and external entities to help build and decorate sustainable pavilions, as well as coordinate and present cultural performances. I am also thankful to the staff members for their hard work, from planning to implementation, in making this a successful event,” she added.

Sultan Alturifi, President of the Emirati Cultural Club expressed his pride in the various cultures comprising the university’s student body and stated that this is the time of the year were students get to express themselves through their cultural and ethnic backgrounds.

The first AUS Global Day was held in 1998 with eight student organizations and 400 students. Since then, the event has grown manifold with this year’s Global Day witnessing the participation of a lively and dynamic student body that comprises more than 5,600 students from 95 nationalities.