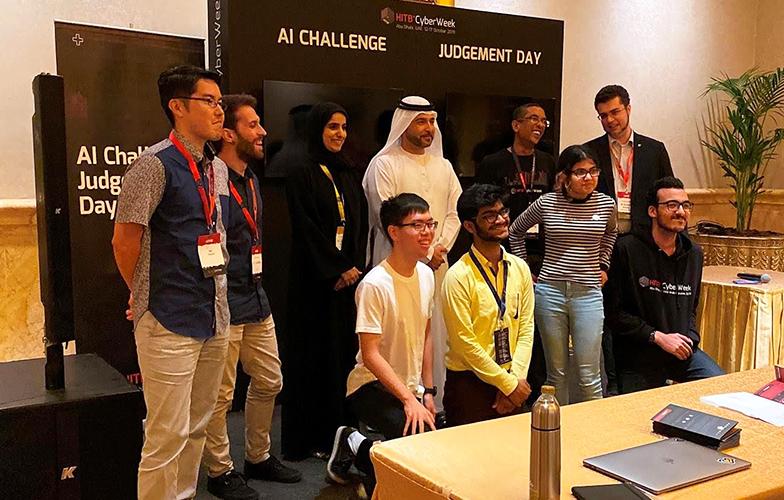 Two American University of Sharjah (AUS) students were part of a team that won second place at the Artificial Intelligence (AI) Challenge held at the Hack in the Box and Cyber Week Conference 2019.

AUS computer science students Sheikh Abdur Raheem and Yousuf Awad and their team members received an award of $35,000 for their entry which was to build an AI system to modify malware and bypass and detect anti-viruses.

“The project aims at creating an AI system that learns how to modify viruses and learns which modification works and which does not,” said Awad.

Speaking about how the system works, Abdur Raheem said: “Imagine your computer is a castle. There’s a guard at the front gate. He checks every visitor’s face before letting them in. Sometimes he rejects someone because they appear in the book of criminals. If we apply a disguise to a visitor, it is possible that the guard will not recognize them.”

He continued: “But how do we disguise malicious files (criminals) so that antiviruses (guards) cannot detect them? We took inspiration from how viruses work in nature; in particular, a process known as antigenic drift. Viruses constantly accumulate tiny mutations that over time prevent them from being targeted by a host’s immune system. The virus remains active while achieving antigenic escape. We mimicked this behavior in code. We have a set of operations that preserve an executable’s functionality. Then our AI performs these modifications on a malware file and tests how many antiviruses failed to detect it. It selects the strain with the highest evasion rate, and uses it as a base for further mutations. Within 15 minutes, we bypass most commercial antiviruses. Scary!”

Led by Abdur Raheem, the student team comprised of five members that included Awad, Victor Tao from the University of Toronto, Eric Zhang from Harvard University, and Quratulain Zainab, from Pristine Private School in Dubai.

It took about two months of work to develop the project, most of which was spent on literature review, with the actual programming fairly straightforward once the algorithm was understood. The team experimented with a number of different strategies before settling on the genetic approach. That included looking at Generative Adversarial Networks, Deep Reinforcement Learning, and Brute force. The students passed the first stage of the challenge, which required them to present a working demo of their project.

Working on the project came with its own challenges, as Awad explained: “We had to understand how AI works, how to modify malware, how to make it effective and we had to do that competing with professionals in the field from Google and other organizations.”

Abdur Raheem reflected on the challenges he faced, noting: “I remember some nights I’d stay up until 5:00am working on the AI Challenge. There was a point where our performance was worse than random, which was discouraging to morale until we fixed it. We had to push hard to get access to some resources we needed. API keys, invite-only accounts, code for certain research papers, GPU machines, not to mention needing to make up for an entire week of missed classes!”

However, there was a lot to be learned from the experience. Awad said: “We learned a lot from the other teams about alternate techniques that can be used and we got to play with malware and understand how anti-viruses work.”

Abdur Raheem said: “Our team members learned a lot over the course of the project. I learned so much about communication, delegation, persistence, documentation, testing, debugging, planning, design, data visualization, security, research, and leadership. Before, I would focus mostly on implementation, but now I’m looking forward to the next time I can manage such a skilled team!”

Participating in such challenges is very beneficial for students. “I think it is extremely important for students to take part in such challenges even if they feel their skills are basic. It is an amazing experience and they will learn a lot from the teams and judges. Also, AUS has professors who are experts in the field of AI so all they need to do is meet with them and talk to them. AUS has great resources,” said Awad.

A large number of universities and technology organizations participated in the challenge, with the five finalist teams being flown to Abu Dhabi to compete for the top prize. The finalists came from Google, New York University, National Research Nuclear University in Russia, Eindhoven University of Technology in the Netherlands, and AUS.

The team pledged to donate 10 percent of the prize to an effective charity. The rest was divided between the team members.

“I’m using my share to pay for my education. It’s always been a dream of mine to tell my parents, ‘Don’t worry about covering my tuition fees this semester, I’ve got it handled!’ Of course, the debt I owe my parents can never be repaid, but I hope to provide more support for my family in the near future,” said Abdur Raheem.

The Hack in the Box and Cyber Week Conference is known for its cutting-edge technical talks and trainings in computer security. It brings together the world’s top thinkers and cyber security experts to share their latest knowledge, ideas and techniques among security professionals but also students.