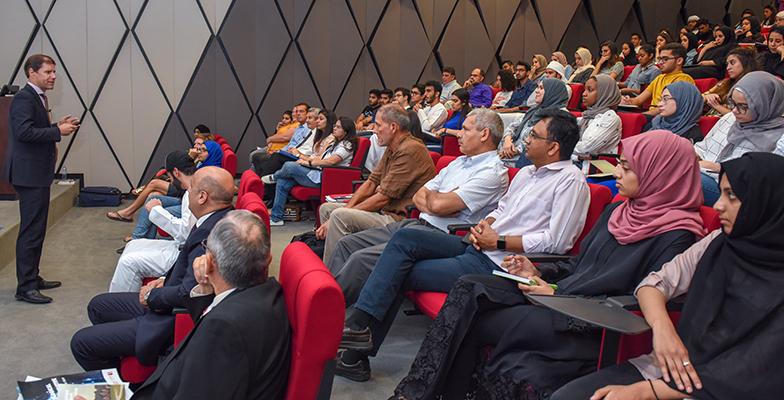 We are living in a world where we are depleting the resources of the future to live in the present, which is why today’s students need to focus on what they want to change and how they want to go about it, said Mathis Wackernagel, Founder and CEO of Global Footprint Network in a lecture at American University of Sharjah (AUS) on September 9.

More than 100 students and faculty members attended the event, which was opened by Dr. Björn Kjerfve, Chancellor of AUS, and Dr. James Gannon, Head of the Department of Biology, Chemistry and Environmental Studies.

“The world entered an ecological deficit by August 1, where it had consumed the whole year’s resources. This has become known as Earth Overshooting Day,” said Wackernagel, who has won multiple awards for his work on sustainability and the environment. “You are going to be the leaders of the world by 2050 and information about today’s world will empower you to produce a wonderful society.  The climate in 2050 will depend on decisions we make now and in the immediate future.”

Wackernagel noted that the Paris Agreement is considered a breakthrough where all nations agreed to reduce the emission of Greenhouse Gases (GHG) to prevent the increase of the average annual global air temperature by more than two degrees Celsius. However, GHG emissions continue to be above the average rate.

He further discussed some of the prevalent misconceptions about decreasing the carbon footprint noting the significance of resource security, the limited availability of renewables, the need to manage demand instead of increasing supply, and the existence of a direct self-preservation and self-interest in addressing resources dependency.

“You need to think of the Earth as a spaceship on which we live. If the resources on this spaceship are about to get depleted, you will not be thinking about making money or the economy as much as how to preserve the resources,” said Wackernagel. “We’ve all got a direct self-interest in this.”

Wackernagel noted that while it is difficult to predict the future, this generation can build the future it wants through foresight and channeling innovation. “This may seem hard, but if Isaac Newton comes and gives a lecture about gravity, we will not say it is impossible to go uphill. We know it will be tiring to go uphill but we know it is doable. Similarly, you have the knowledge and the principals to support you even if creating change is going to be difficult.”