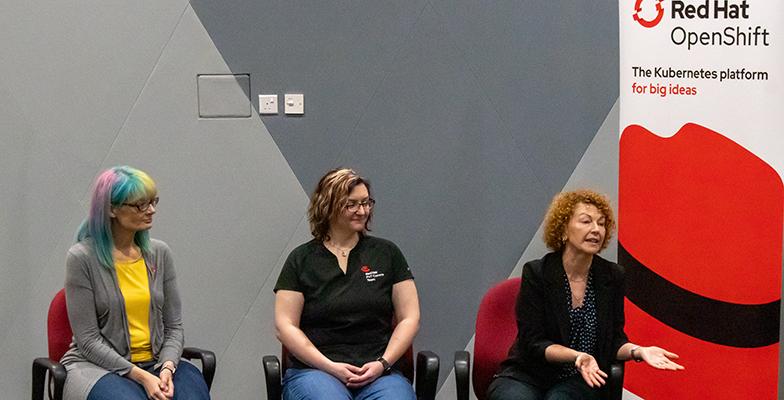 Women leaders in tech share their expertise and knowledge

With the ever-increasing significance of the leadership roles played by women in the technology sector, students at American University of Sharjah (AUS) got an opportunity to listen to and interact with three distinguished guests from the industry at a special event held recently. Entitled “Women in Tech: How to Build a Career in the Open Source Community,” the talk featured senior officials from Red Hat who shared their knowledge and expertise with the audience.

Denise Dumas, Vice-President in Global Software Engineering; Jennifer Krieger, Chief Agile Architect; and Allison Matlack, PnT Communications Manager, spoke to the audience about some of the important elements that are instrumental in achieving success in the world of Open Source. They also shared various aspects of their professional journey and the many challenges they faced while on that journey and the steps they took to overcome the challenges. Dumas, who is a prominent promoter of women in tech, discovered her passion for tech and her career quickly gained an upwards trajectory as she worked with tech startups and tech giants such as HP before joining Red Hat 11 years ago. She has won numerous awards including the Stevie Awards, the Female Executive of the Year Award in 2015, and the Lifetime Achievement Award. She is passionate about the development of talent, giving her team challenging work and letting them experiment and find their own way in the world of technology.

The presenters also discussed particular characteristics of Open Source communities as well as emerging trends in the IT sector. Students and faculty members got to hear first-hand from Krieger, who is passionate about leading the change into Agile in a way that supports Red Hat's commitment to Open Source. With 20 plus years of experience in software development and multiple roles in both Waterfall as well as Agile lifecycles, she is a certified Scrum professional and project manager. Matlack, who is also an experienced Agile practitioner and coaches software engineering teams in various stages of maturity, is a communications specialist with a change-management style steeped in the tradition of the Open Decision Framework. She has been an Open Organization Ambassador since 2016.

Known for its commitment to collaborations with partners in tech and the business world, AUS teamed up with Red Hat in 2017 to establish the AUS Red Hat Academy on campus, which functions as a center for enterprise-ready talent by providing them with Red Hat training.

The talk, which was held in the ESB Auditorium, was organized by the AUS Department of Computer Science and Engineering in collaboration with AUS Computer Club and Association of Women Engineers.