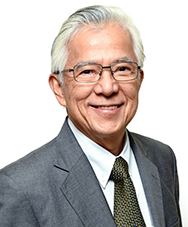 Professor Shih is a foreign member of the American Academy of Arts and Sciences and US National Academy of Engineering. He received the French decoration Chevalier in the Order of the Legion d'Honneur in 2005 and the inaugural Chief Executive Leadership Award for Asia Pacific from the Council for Advancement and Support for Education in 2007.

Drawing from experiences at leading US universities, Professor Shih was instrumental in remaking NUS as a research-intensive university with an entrepreneurial dimension. As NUS President, he led the modernization of the undergraduate curriculum, implemented a modular course system, expanded overseas student exchange programs, and strengthened academic partnerships with the world’s leading universities. He was chairman of the Association of Pacific Rim Universities from 2002 to 2006 and was a key driver for the founding of the International Alliance of Research Universities in 2005.

Leading KAUST in its formative years, Professor Shih promoted the university as a destination of choice for graduate education and cutting-edge research, where the synergy between education and research catalyzes ideas and innovations to address global challenges and improve lives. Planned from its inception with world-class research facilities and a Research Park and Innovation Cluster, KAUST is today a thriving work-play-live community of several thousand faculty, students, staff and families from more than 100 countries.

Professor Shih received his MS and PhD from Harvard University. He divides his time between China, Singapore and US, where he is a Distinguished Visiting Professor at the University of California, Santa Barbara.