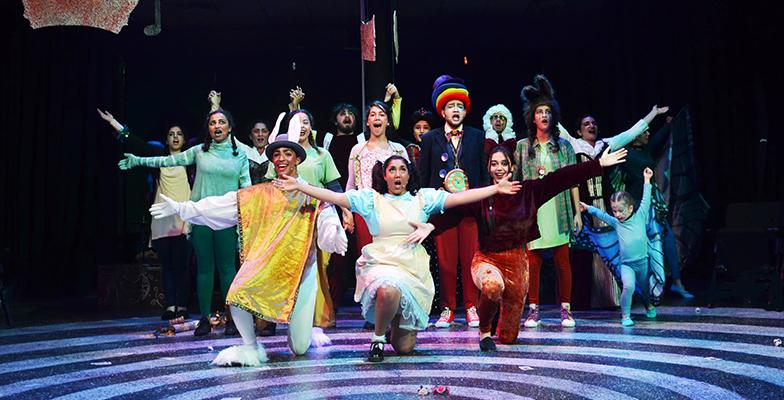 Alice in Wonderland debuts to a packed house at AUS

The much-anticipated Alice in Wonderland, played to a packed house on its opening night yesterday, April 10 at American University of Sharjah (AUS). The musical-theater production, adapted from Lewis Carroll’s famous book, was presented by the Performing Arts Program of the AUS College of Arts and Sciences.

The production follows Alice on a toe-tapping journey through the world of wonderland. Featuring memorable characters such as the Mad Hatter, the Cheshire Cat, and the Queen of Hearts, the show entertained and amused the large audience which comprised students, faculty, and members of the public.

Speaking about the show, Anthony Tassa, Director of the show and Professor of Visual and Performing Arts at AUS, said:

“In our production of Alice in Wonderland, we have decided to focus on those changes which occur in Alice. What kinds of discoveries does she make about herself as she tumbles down the rabbit hole and through wonderland? Many of those personal discoveries are apparent to her, some much more subtle. She receives advice and smatterings of wisdom from a plethora of characters she encounters on her journey.

“One goal of this production is to carry the audience along with Alice on her adventures in the hope that they might discover something about themselves and realize that changes are still occurring. The technical elements are designed and built to reflect this idea of change; in particular, as we go from the lush green countryside into the dazzling world of wonderland,” he added.

With wonderful performances by the entire cast, the production is superbly directed by Tassa, with Dr. Sherri Weiler, Associate Professor of Performing Arts, in charge of musical direction and conducting. The AUS Performing Arts Program is known throughout the region for the high quality of its productions. It offers students unique opportunities to study the exciting fields of music and theatre and to showcase their talent by performing in concerts and theatrical productions.

The program offers students a minor in theatre or music as well as exciting introductory courses for students who have an appreciation for music and theatre but who are focusing their studies in different areas, such as business, architecture, humanities and social sciences.