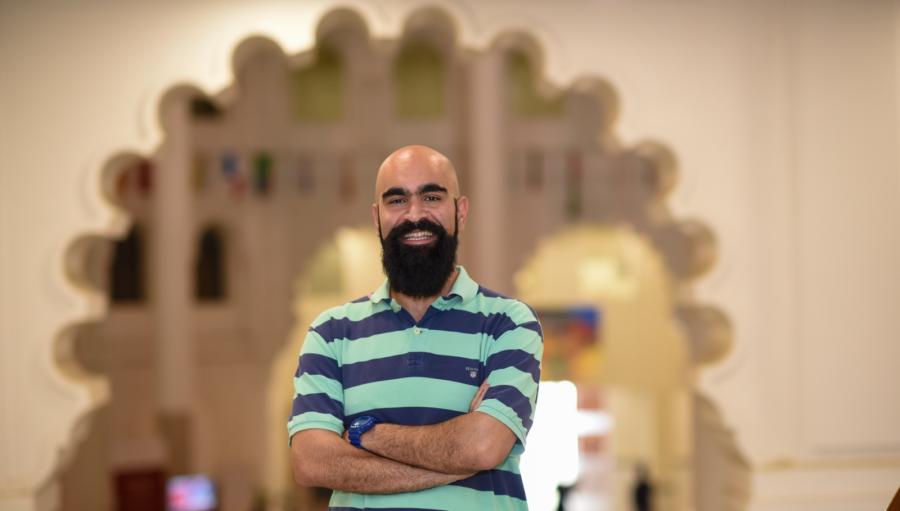 Dr. Ahmad Nemer, a graduate of American University of Sharjah’s (AUS) Class of 2010, has recently been appointed to a prestigious post-doctoral position at Princeton University in the United States of America. The significant appointment also presents unique opportunities for Dr. Nemer to collaborate with his former professors and current students from the Department of Physics in the College of Arts and Sciences at AUS.

In his new role at the Ivy League institution, Dr. Nemer will pursue further research on the modelling of protoplanetary disks and matching the models with observations from ground and space telescopes from all over the world, and will draw from data analysis conducted at AUS.

Graduating with a bachelor’s degree in electrical engineering from the AUS College of Engineering, Dr. Nemer received a doctoral degree in atomic and molecular physics at Auburn University in June this year, before his appointment at Princeton.

After leaving AUS, he worked for five years in a power services company, however, his passion remained in academia and research. With the help of Dr. Ali Alnaser, Professor and Head of the Department of Physics at AUS, Dr. Nemer applied to various graduate schools to earn his master’s degree in physics. He was accepted at Auburn University in Alabama from where he subsequently completed his PhD as well.

“My research will be about the early stages of stars at their infancy. At that point, the gravitational pull of the star will collect all the materials (atoms and molecules) from the surrounding Interstellar Medium. These atoms and molecules will create a rotating disk around the star. It is hypothesized that this disk of materials is the birth place of planets (hence the name Protoplanetary disks), and understanding this environment at these early stages will shed some light on how our planet was formed some 4.6 billion years ago.” said Dr. Nemer.

Despite his departure from an undergraduate concentration in electrical engineering, Dr. Nemer affirms the solid foundation that was laid for him as a student at AUS.

“Without the education and the level of professionalism I received at AUS, I wouldn’t be where I am today. I was taught by top class professors, and the teaching and the curriculum were of the highest standards and definitely on par with the best US universities,” he said.

“I’m really pleased to see that AUS now offers a Bachelor of Science in Physics degree for students who, like myself, are interested in this dynamic field. Of the sciences, I’ve always been interested in physics the most, specifically astronomy. Though there wasn’t a major in physics at AUS when I was a student, when I joined the graduate program, I found that most of the engineering knowledge I had acquired at AUS was common with the physics program and I only needed to complement my knowledge in certain specialized courses,” said Dr. Nemer.

AUS introduced the Bachelor of Science in Physics in 2018. The program is headed by Dr. Alnaser, whose research interests are centered around the use of ultra-strong lasers in photographing and manipulating experimentally the structure of matter on extremely short time scale. Dr. Alnaser has more than 15 years  of experience teaching undergraduate physics courses and advanced physics laboratories, and has co-supervised the research work of master’s and PhD students in the US, Canada and Germany.

The Department of Physics at AUS has established close links with significant regional and international research programs and institutes, including the Mohammed Bin Rashid Space Center, the Max-Planck Institute for Quantum Optics in Germany, University of Cambridge in the UK, and Harvard University in the US, among others. These international research collaborations ensure AUS faculty, students and alumni have access to a wide network of researchers and experts from around the world and present exciting opportunities to pursue research alongside them.

During his time at Auburn University, Dr. Nemer was recognized for his outstanding work as a graduate research assistant (GRA) and graduate teaching assistant (GTA) and spent six months in Japan for the purpose of conducting research on Synchrotron radiation collisional experiments. There he found himself benefiting from the AUS network, working with some of Dr. Alnaser’s own research partners.

“I worked with some of Dr. Alnaser’s collaborators in Japan at SPring-8 (one of the largest laser facilities in the world) which is very similar to the work that is being done at AUS now with the new laser lab. And I am actually collaborating with Dr. Alnaser and his students on a project now to analyze some the first data that was taken by the laser at AUS.”

Since his graduation as an undergraduate at AUS, Dr. Nemer has drawn on the support and mentorship of his former professor.

“I want to emphasize the importance of having proper guidance in achieving your goal. It is very rare to find someone who is willing to give you sincere advice without expecting anything in return other than wanting to see you succeed. If you do find such a person, make sure you hold onto them. Dr. Ali Alnaser was that person for me and I couldn’t have done any of this without him,” said Dr. Nemer.

“It is always a pleasure to see your students succeed in their endeavors. Ahmed is an exceptional individual and has always been committed to pursuing his goals. Here at AUS, one of our aims since the very beginning has been to provide talented individuals such as Ahmed the right kind of encouragement and environment so that they are able to follow their dreams.”

For more information about the AUS Bachelor of Science in Physics program, please visit: www.aus.edu/physics