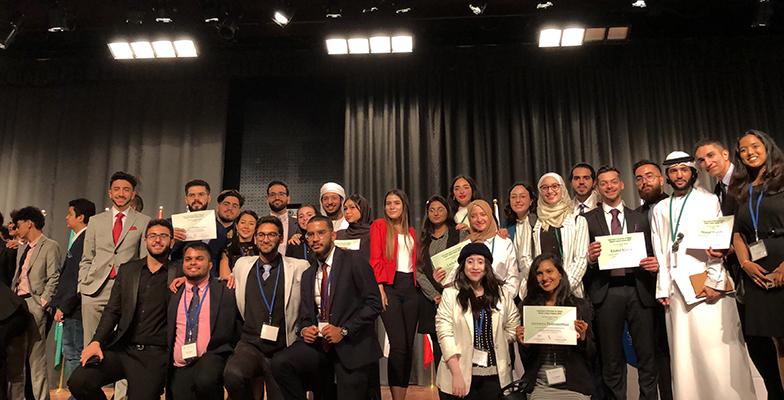 During the three-day event, students from various academic institutions acted as delegates representing various world countries and took part in a number of committees where they debated political and economic world issues. A number of AUS students chaired some of committees at the AUDMUN.

Speaking about her participation, AUS student Aiswarya Padmanabhan, said: "My experience at AUDMUN was truly one of a kind. What made the conference stand out was the whole element of fun and recreation that the organizers added to the event, giving MUN a whole new color."

"It was really interesting to meet and learn from new people, and I am glad that I was able to make the best out of it," she added.

Abdulla Al Matrooshi, a senior International Relations major, said that one of the advantages of studying at AUS is the many opportunities available to students to participate in such events. “You can’t have a building without a base. The job of AUS is to provide you with a strong base… how high you want to reach is up to you. The opportunities for extracurricular activities that AUS provides are endless. I would suggest to all the students to make the best use of them. Knowledge is power, your hard work and knowledge is what determines how high you’ll reach. The sky is the limit for everyone."

Dr. Jeniece Lusk, Assistant Professor of International Studies at AUS, also spoke about the win and said: "It's difficult to remain humble when year after year our students exceed expectations at Model United Nations meetings at home and abroad. This year's achievement of nine awards at AUDMUN is just a further testament to the diligence, ambition, and drive that AUSMUN incorporates."

She added: "The vigor and quality of our AUSMUN team is impressive, and reflects the energy and efforts taking place behind the scenes as we prepare for AUSMUN 2020. Thank you to AUDMUN for yet another great experience, and congratulations to all of the AUSMUN delegates."

Nine of the 13 participating students received an award in recognition of their performance in the different committees. These were: