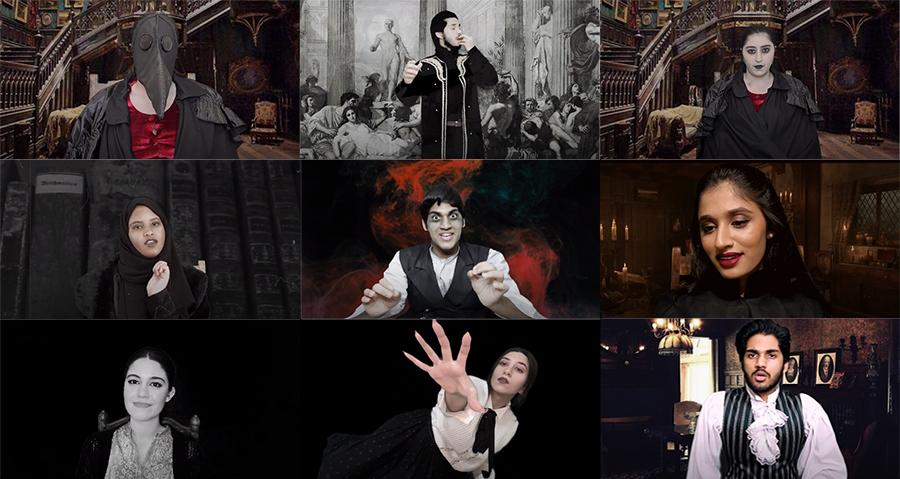 A talented team of student actors and production crew members from the Performing Arts Program at American University of Sharjah (AUS) have created an online performance of the works of American author Edgar Allan Poe, entitled Edgar's Gorey Tales: An Evening with Poe. The recorded production can be seen here.

Highlighting the poems and short stories written by the celebrated American author, the performance starts with a reading of Poe’s famous poem The Raven, with parts of the poem interwoven throughout the entire performance. Five short stories were featured—The Black Cat, The Tell-Tale Heart, Morella, The Premature Burial and The Masque of the Red Death—as well as the poem Annabel Lee. Five students played various parts within the performance, which was brought together by student production managers and student editors.

Speaking about the production, Professor Anthony Tassa, Performing Arts Coordinator, said: “In essence, this is a devised piece, which was created by the cast and crew at AUS. Knowing we would be online, it made sense to use the work of Edgar Allen Poe. First person story-telling pieces were most suitable and this allowed us to avoid traditional scenes as one might find in a play, but still created some exciting and creative acting and technical work.”

Creating the entire performance online from their respective homes required the team members to think outside the box. Professor Tassa said: “Each acting student was provided a green screen, microphone, light for their face, a costume and a chair. We rehearsed online. The students also rehearsed with their assigned production manager. Then they had to shoot their pieces at home in front of the screen and upload their clips. Student editors took over after that and layered in images based on the work of writer and artist Edward Gorey, followed by sound. They also received editing notes from their professors to make the required changes.”

Working on an online performance brought about some challenges for the actors, but it also opened up avenues for new experiences.

Talking about her experience, Maria Abdirahman, a multimedia design student minoring in theatre and the narrator of the poem The Raven, said: “Not performing in front of an audience felt limiting because when you perform in front of a live audience, you feed off their energy and the other actors. The experience of being physically on stage is something so important to me. However, this performance was a unique experience as I learned a lot about acting in front of the camera. I was also part of the production team, so I learned about editing, lighting, special effects and working with a green screen.”

Vighnesh Prasad, a second-year English Literature major, who appeared as a narrator in The Tell-Tale Heart as well as playing other roles in the production, said: “I never went through a process where I had to look into the camera and perform. While this was a new learning experience for me, I tend to prefer theatre production over film any time. This experience showed me how we can adapt to the situation we are in. We wanted to continue to tell stories that transcend times, cultures and circumstances. I believe that the limits to our potential are only in our imagination.”

As one of the rare programs of its kind available in the region, the Performing Arts Program at AUS offers students unique opportunities to study the exciting fields of music and theatre and to showcase their talent by performing in concerts and theatrical productions. Students also gain valuable hands-on experience by participating in the technical and backstage components of music and theatre productions. For more information on the program, please visit www.aus.edu/cas/performing-arts-program/about.