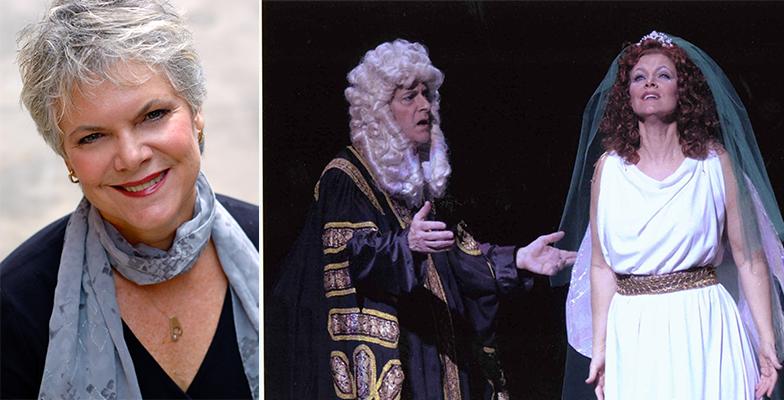 Dr. Sherri Weiler, Associate Professor of Performing Arts at American University of Sharjah (AUS), has been selected as soloist for Handel’s Messiah, to be performed at Dubai Opera in December.

Handel’s Messiah is considered a musical masterpiece and one of the world’s most beloved musical works. This 1742 celebrated oratorio—with its spectacular “Hallelujah!” chorus—will be conducted by Andrei Danilov with the St. Petersburg Tchaikovsky Theatre of Ballet Orchestra. The performance will see 200 local and international voices and musicians performing.

“I am happy to sing professionally in Dubai. When I became an academic, I had already spent years developing my performing persona, but I couldn’t ignore any longer how much I loved teaching. I returned to study at Florida State University to obtain my doctorate in voice performance and pedagogy in 2004 to enable me to teach at the university level, and I’ve been dedicated to that since then. Performing has taken a necessary second place. Singing Messiah with Dubai Opera represents the opportunity to focus on performing again and I’m loving it!” said Dr. Weiler.

The seasoned opera singer was selected as a contralto soloist earlier this month following two auditions. The latter audition was attended by Rob Johnston, Choral Manager for the BBC Singers and Messiah’s Chorus Master, and Joanna Marsh Griffiths, Composer, Artistic Director of Festival Chorus Start-Up and Founder of ChoirFest Middle East. “Messiah promises to deliver a great emotional impact and an uplifting message, and it is especially being performed to highlight UAE’s Year of Tolerance,” Dr. Weiler said.

The opportunity to be part of this significant performance came about after one of Dr. Weiler’s students contacted her about it. “One of my fabulous AUS students, Mohammad Atallah, a recent computer science engineering graduate, and several other men from the AUS Choir, conducted by Dr. Terrell Hooper, joined the new chorus formed through Dubai Opera last spring — the Dubai Opera Festival Chorus. During the summer, the chorus announced their plans to present Handel’s magnificent oratorio Messiah, and Mohammad emailed me about it. I thought this was something I would like to do as well. In mid-August, shortly before I returned to campus to begin my fourth year at AUS, I emailed the chorus organizers and asked whether I might still audition. They were extremely positive and I sang for them,” said Dr. Weiler.

The rehearsal for Handel’s Messiah is expected to be intense, with four long days of rehearsals and just one with the orchestra. “The oratorio is quite demanding and will require great concentration and unity of purpose to fully realize Handel’s music,” she said. Choral preparation will take place in October and November, led by Chorus Master Rob Johnston.

Dr. Weiler hopes to use this most recent performance as a learning opportunity for her AUS students:  “I want to introduce my students to the skills and dedication required to perform at the highest level through this wonderful opportunity. Nothing teaches better and faster than a real-life example! I am able to talk to them about my own process of preparation as I rehearse for this momentous event.”

“I sang professionally for many years while simultaneously raising two children with my chemical engineer husband. He has been extremely supportive of my career, including relocating to the UAE for me to teach at AUS!” she said.

At AUS, Dr. Weiler teaches course in music notation, class voice, class piano and applied voice lessons through the Performing Arts Program, one of the rare programs of its kind in the region. She is also the director of the AUS Women’s Choir.

Dr. Weiler’s rich operatic portfolio comprises performances with many companies in Anchorage, Sacramento, Denver, Cleveland and Lexington, as well as at the American Institute of Musical Studies (AIMS) in Graz, Austria. She has also sung with orchestras, and performed numerous solo concert and oratorio roles. Some of the highlights of these roles include singing the mezzo-soprano solo in Prokofiev’s Alexander Nevsky with Mstislav Rostropovich when he was conducting the National Symphony, and singing the alto solos in Beethoven’s 9th Symphony; the Requiems of Verdi, Duraflé and Mozart; Mendelssohn’s Elijah; the Bach Magnificat and St. John Passion; and Handel’s Messiah.

This passion for singing has its roots in Dr. Weiler’s childhood. Growing up in a musical family, she sang practically “everywhere.”

“I cannot remember a time when I was not interested in singing, but I did not start formal voice lessons until I was a sophomore in college. I sang in church choirs as a child and teenager. My mother was a church organist, and I learned very early to read music so I could turn pages for her when she played,” she said.

She added: “My father’s family had a gospel trio of brothers who sang on the radio in Oklahoma and Texas and were quite well-known there in the 1930s and 1940s. There was always music when I visited my grandmother in Oklahoma, and I learned to sing harmony in Southern gospel style. My mother’s family was also musical in a more classically trained sense. When I was 12, my class took a field trip to see Puccini’s opera Madama Butterfly. I fell in love with the beautiful voices, the staging, the lighting—everything about opera! But I was not exposed to classical singing again until college. I also grew up during the glory days of acoustic folk music, and my uncle gave me a guitar when I was 13, which I taught myself to play. I sang all the Joan Baez, Judy Collins and Joni Mitchell songs, and even performed in coffee houses as a teenager with my guitar.”

A few years after receiving her Bachelor’s degree in English Language and Literature and working as an English teacher, Dr. Weiler auditioned for the University of Cincinnati College-Conservatory of Music, one of the top conservatories in the US, and received a full scholarship to pursue her master’s degree in vocal performance.

For more than 25 years, Dr. Weiler taught vocal music at the University of Alaska Anchorage, Alaska Pacific University, Florida A&M University, Shorter College and Florida State University. Since 2008 she has served as a member of the editorial board for the peer-reviewed Journal of Singing, and published several articles on the songs of Berlioz and Wagner, the Commedia dell’arte, and Turkish and Russian vocal music. She also coached Russian language and song literature for 12 years with Moscow Conservatory piano professor Svetlana Velichko; the two released a CD of 19th-century Russian songs in 2001, Russia: Golden Century of Song.