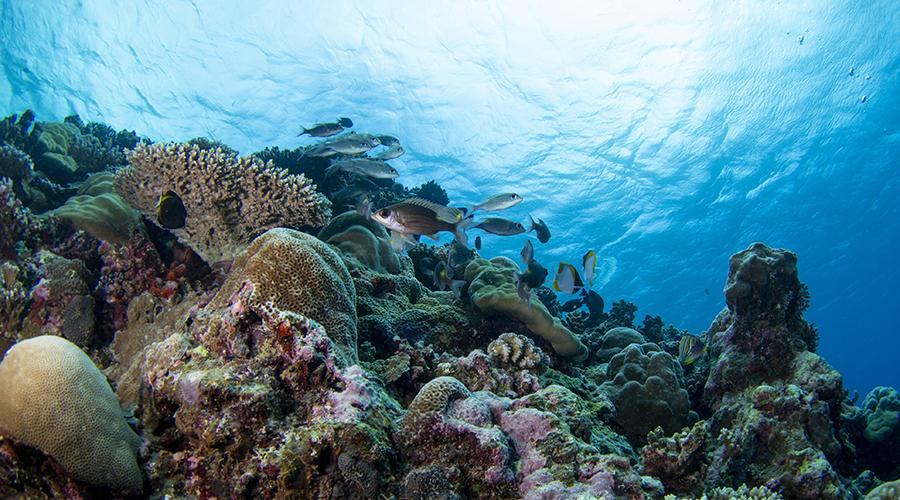 Coral reefs in the Arabian Gulf may have a special connectivity mechanism that allows them to communicate with each other in spawning periods, linking them with corals in other parts of the Gulf and bolstering their chances for survival, found a recent study conducted by researchers at American University of Sharjah (AUS).

This mechanism plays a vital role as it enables coral larvae to be transported from a relatively healthy area to regions in need of larvae supply due to extreme natural and human-caused stress, according to the study, which investigated the potential coral larvae connectivity in extreme environments such as the Arabian Gulf.

“The Arabian Gulf is subject to fast heating and changing environmental dynamics, which puts its coral reefs at risk,” said Dr. Geórgenes Cavalcante, Research Fellow of Environmental Sciences at the AUS College of Arts and Sciences. “Coral reefs are one of the most biodiverse and economically vital ecosystems in the world, and an important asset to the Arabian Gulf. However, they are degrading because of global climate change and local anthropogenic [human-induced] stressors. In recent decades, we have witnessed degradation of coral reefs because of human activity, and mass coral bleaching because of increased ocean temperatures. Despite adverse conditions and temperatures, coral communities still exist in the waters of all eight nations bordering the Gulf. Therefore, understanding the potential connectivity pathways among coral reefs within the Gulf is extremely relevant to understanding their mechanisms of adaptation and survival,” he added.

The findings of the research suggest that the amount of larvae available from potential supplying regions in the Gulf may be just enough to maintain and recover the areas under pressure and facing degradation. “We have noticed that there is great potential for ‘self-recruitment’ where the larvae settle on their parental reef and for ‘inter-regional connectivity’ where larvae move from one region to other, for example, moving from Kuwait to Bahrain and onwards to the UAE,” explained Dr. Cavalcante.

Dr. Cavalcante’s noted that the findings are extremely important for scientific communities, as they have begun to unveil important sources of larval colonists that aid in resupplying the degraded reefs along the coast from Abu Dhabi to Ras Al Khaimah and therefore support in the recovery of the area’s reefs—something that was previously not well understood.

He added: “Global warming is affecting coral communities throughout the world. In the Arabian Gulf, the warming effect is particularly relevant as the corals in the region are already subject to extremely high temperature conditions, and the regional coral communities live at the upper level of what they could adapt to. Any further increase in temperature, therefore, puts them at immediate risk.”

While conducting the research, Dr. Cavalcante used state-of-the-art numerical models to simulate the coral larval behavior and dispersion in order to evaluate potential movement from one region to the other, in effect mapping the connectivity pathways among coral complexes within the Arabian Gulf. Involved in discussions of the research results were Dr. Cavalcante’s AUS colleagues Dr. Edmo Campos, a Research Fellow, and Filipe Vieira, a Visiting Scholar.

Dr. Cavalcante said that this was the first time such a study was developed in the region. The researcher adopted a conservative approach based on available knowledge of the coral in the Arabian Gulf and focused on specific years to run the scenarios. However, since coral larvae flow depends upon water circulation patterns that vary from year to year, he is currently working on a new study using another set of years to evaluate coral larvae dispersion in that timeframe and to detect potential connectivity.

“Such a strategy will give us a better representation of the different oceanographic conditions present in the Gulf and improve our knowledge of the locations with more potential to serve as a source (areas that supply larvae) or sink (area of recruitment) region,” said Dr. Cavalcante.

Dr. Cavalcante will be speaking on the topic on October 28. To find out more, please click here.