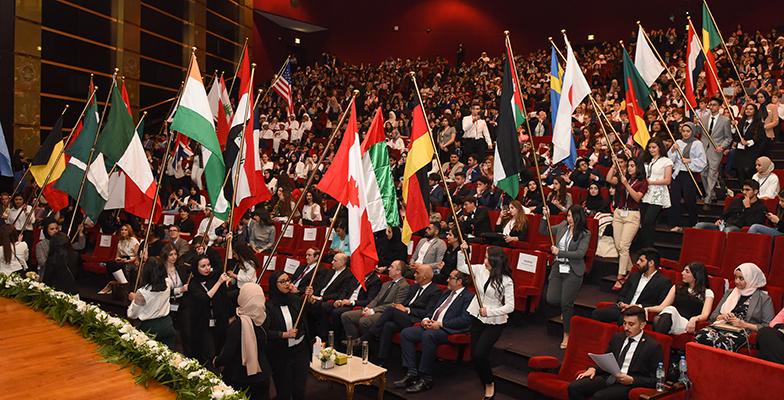 More than 1,300 students from UAE and GCC participate in the 12th AUS Model United Nations

More than 1,300 students had the opportunity to learn about global trends, diplomacy, and the mechanics behind the United Nations during the American University of Sharjah Model United Nations (AUSMUN) conference held at the university’s campus February 21—23, 2019. The theme of the 12th AUSMUN was Empowerment and the Youth.

During the three-day event, students from 11 universities and 32 schools from around the UAE and GCC honed their communication, research, diplomacy, negotiation, teamwork, and public speaking skills, and networked with like-minded individuals.

The opening ceremony was attended by senior university officials who welcomed the participants to the campus. The ceremony also included a delightful performance by the AUS Choir and a keynote address by Samer I. Asfour, Regional Director, Middle East, Gulf Cooperation Council Countries (GCC) and Turkey for Tesla Motors.

The conference this year introduced three new committees which included the International Monetary Fund (IMF), International Court of Justice (ICJ) and an Arabic UNESCO committee that discussed implementation of UNESCO operational strategy on youth and protecting and preserving endangered languages.

The student delegates addressed a wide range of topics, including reform of the United Nations Security Council; Rohingya genocide in Myanmar; defining the limits of foreign intervention in DRC Congo; climate change and global security; the role of the youth in the informal economy; improving mechanisms for accountability and transparency within the UN System; strengthening the UN response to sexual exploitation and abuse (SEA) cases in UN field missions;  criminal accountability of UN officials and experts on mission; Female Genital Mutilation (FMG) and its health consequences; integration and inclusion of people with physical and mental disabilities into mainstream society; protecting the right to education for refugee children, addressing and revising the ‘Framework of Child Marriage’ in developing countries; addressing the challenges of food insecurity in South Sudan; and framework to provide food aid to sanctioned countries, among many others.

Speaking on the occasion, Natasha Nazi, Secretary-General of AUSMUN 2019, said:

“With the exceptional delegates we receive every year, our enthusiasm to provide the best quality conference is elevated with each new session. This year marks 12 years of dedication, eagerness, and enthusiasm to learn and discover for everyone affiliated with AUSMUN. It has, thus, brought with it new opportunities for everyone involved to grow through an experience that engulfs learning on different levels. With Sapere Aude as a motto, we hope we will deliver an experience that will make delegates eager and devoted to never stop learning."