Over 1,000 students from across the country participate in AUS Model Congress | American University of Sharjah
Skip to main content
S 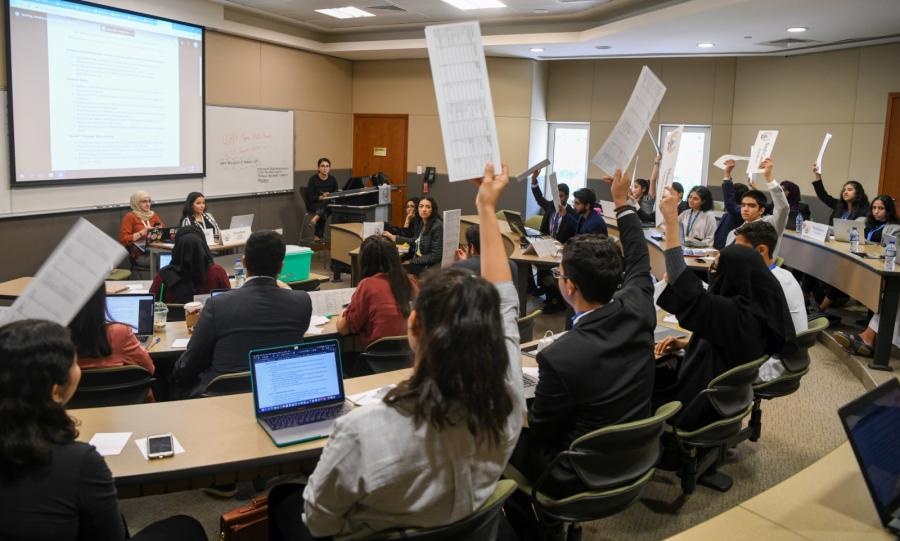 Over 1,000 students from across the country participate in AUS Model Congress

More than 1,000 university and school students from the UAE and beyond participated at the American University of Sharjah Model Congress (AUSMC), which concluded its activities last night, November 9, on campus.

Organized by the Department of International Studies at the AUS College of Arts and Sciences (CAS) at AUS, the three-day event witnessed the participation of 18 schools and eight universities from across the UAE, and more than 20 students from Saudi Arabia. The event simulated the legislative, executive, and judicial branches of the United States government. The legislative branch consisted of the Senate and House of Representative committees, whereas the executive and judicial branches consisted of the National Security Council and Supreme Court respectively. Students were given the opportunity to represent elected officials based on states and party affiliations designated to them for the purpose of resolving debates in the American political system.

Speaking about the importance of the AUSMC, AUS student Lena Khalifa, President of the AUSMC, said: “Model Congress shows how individuals from different backgrounds can come together for three days and cooperate, negotiate, and argue on how to solve crucial issues. The U.S government's domestic laws have an effect on the world economy, social norms, environmental policy as well as global diplomacy and stability. Delegates become more personalized in our conference as they pose as individual senators and representatives from the Senate and House of Representatives. We want to send a message to delegates that what is termed as impossible can be possible. Interest in our approach and event has increased greatly with numbers having grown exponentially this year.”

This is the second AUSMC organized by AUS. Last year, around 350 students participated in 12 committees. This year, the number of students tripled and the committees amounted to 20. Each of the committees discussed two topics.

Khalifa noted: “The conference was a success this year because we were able to create a balance between the work, negotiations and discussions, and social fun time. We also provided the participants with room to express their views more freely within the framework of the organizational rules governing the sessions.”

The conference also included a social night during which participants had the opportunity to unwind. “I was not aware how much talent we had at AUS. From organization to performances, it was all AUS students’ work. During the opening and closing ceremonies we had piano performances by two engineering students who were just incredible. Social night was also great because not only was it entertaining for the participants, but it also showcased the talents of AUS students.”

She added: “AUS gives a lot to its students. Not only does it enrich them academically, but it also allows them to grow personally and professionally through events like these where their skills are honed and their talents are given space to shine.”