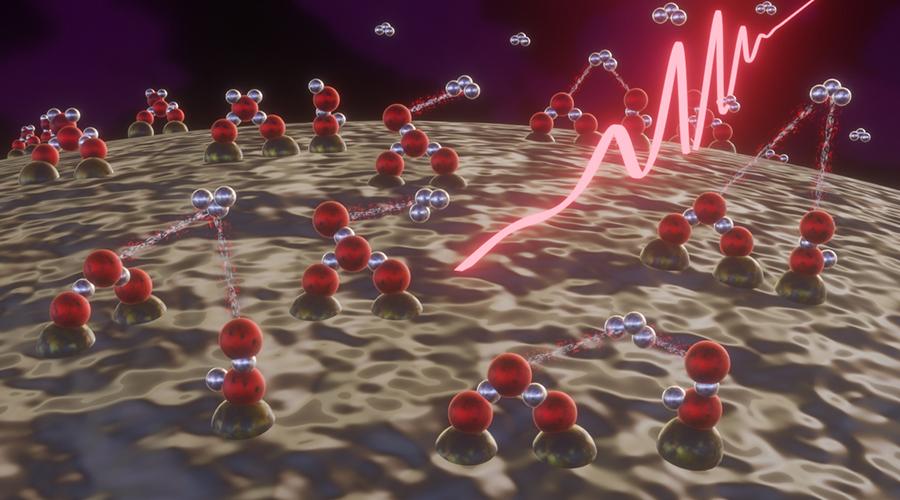 Research impacting our knowledge of how life in the universe began has been released by scientists from American University of Sharjah (AUS). A team of researchers led by Dr. Ali Alnaser, Head of the Department of Physics in the university’s College of Arts and Sciences, in collaboration with renowned scientists from Ludwig-Maximilians-Universität München and the Max Planck Institute for Quantum Optics in Germany, and Manipal Academy of Higher Education in India, has published the results of experiments, using intense laser light to irradiate water molecules absorbed on nano-particles, in the prestigious Nature Communications Journal.

The experiments have led to the discovery of a new reaction that led to the production of Trihydrogen ion (H3+), arguably the most important triatomic ion (a molecule consisting of three atoms) for generating living matter in the universe. Up until this point, it was not possible to generate this type of ion from water using conventional chemical synthesis techniques. This ion is fundamental to the production of many organic compounds in the cosmos and is regarded as an important precursor for the origin of life in the universe.

Dr. Alnaser said of the impact of the research: “The findings reveal a new mechanism for the production of H3+ that mimics the conditions of outer space. The research therefore provides new insights into the process governing the beginning of life in the universe.”

In addition to providing a greater understanding of how life began, the research findings also have the potential to be extended to the production of other new molecules. Such molecules may have significant biological and environmental applications in both terrestrial and non-terrestrial situations.

The significance of the research has been recognized by the global scientific community, with Nature Communications publishing the research this week in the article “Anomalous Formation of Trihydrogen Cations from Water on Nanoparticles.” Nature Communications forms part of the Nature portfolio, a group of journals forming one of the world’s most respected and prestigious sources of new scientific research. Every month, approximately nine million people worldwide read news, analysis and commentary on Nature.com.

Dr. Alnaser believes the materials science and engineering research facilities at AUS played an important role in the success of the research.

“Our research brought together many technologies across laser physics, molecular dynamics, quantum optics and nano-technology. AUS’ advanced laboratories allowed for such technologies to be successfully married together,” he said.

Dr. Alnaser noted that research of this magnitude acts as inspiration for existing and future students of AUS, demonstrating how a degree from AUS can lead to remarkable achievements, even in the early days after graduation.

He said that a driving force behind much of the lab-based experiments for this research was M. Said Alghabra, who graduated from AUS in 2020 with a Bachelor of Science in Computer Science with summa cum laude honors. Alghabra spent about two years working on this project under the supervision of Dr. Alnaser in the AUS Department of Physics. During his time working on this project, Said received help and guidance from Mazhar Iqbal, Senior Laboratory Instructor in the Department of Physics, as well as visiting professor Rami Ali. The next step in Alghabra’s career is to pursue a graduate degree at the prestigious Technische Universität München, Germany, one of the top schools in Europe and the world. He has received a DAAD scholarship to pursue his graduate studies. These scholarships are aimed at graduate students and awarded for study and research visits to university and non-university research institutions in Germany.

“His story will no doubt inspire many students currently enrolled at AUS, or who plan to undertake their studies at the university once completing high school,” Dr. Alnaser said.