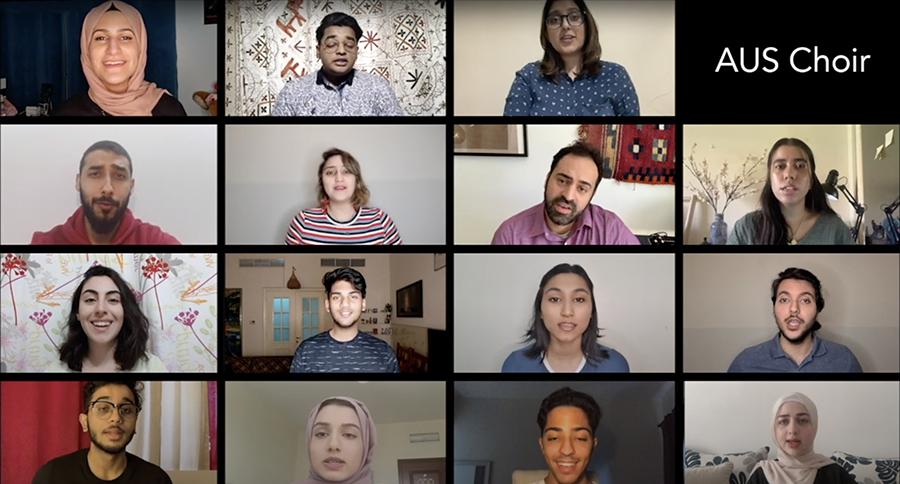 A night of music and culture at AUS Fall Concert

Organized by the Performing Arts Program at the College of Arts and Sciences, the virtual event featured students and alumni in the Arabic Music Ensemble, who performed Lamma Bada Yatathana, one of the most famous muwashshahs in the classical Arabic music tradition, and Arji'i Ya Alfa Layla, by the iconic Lebanese singer Fairuz.

The AUS Choir performed a piece called Sing Your Way Home, and another piece by Global Voices, a music group comprising AUS students and alumni.

To see the performance, visit bit.ly/AUSPerformingArts.

“Our selections are based on music that can demonstrate the ability and musicality of the students, as well and their commitment to practice. The show was a mix of various genres to keep the audience engaged in a virtual type of performance rather than a typical in-person concert setting.” said Dr. Albert Agha, Assistant Professor in Performing Arts and the director of the Arabic Music Ensemble.

The concert was pre-recorded, with the students and faculty working remotely.

“We overcame the challenges of working online with the use of some really good technology. Aside from the conferencing platforms, we were able to use software that enabled us to overlap each of our voices on top of one another, one at a time, until we got the full sound. We have also used professional recording software and equipment to capture the sound as best as we can. I think the one upside of doing a virtual music collaboration is that you are able to take your time in producing and mastering the sound to be perfect,” said Dr. Agha.

He also saw this online premier as an opportunity to share the students’ talents globally, as well as a way to encourage students in different parts of the world to see what they can learn and accomplish when coming to study at AUS. Students from all majors at AUS have the opportunity to take courses in the Performing Arts Program, including singing, piano, choir, Arabic music, acting, costume and scenic design, stage management, and playwriting.  The program offers students the opportunity to participate in musical and theatrical performances, as well as to pursue a minor field of study in music and theatre.

The students had to do a lot of work to perfect their performance. First, the music had to be learned; then, it had to be practiced, recorded and re-recorded, with post-production following.

Overcoming echo, missing segments of sound, and issues with hearing the other performers were some of the challenges the students faced. “I learned to always be patient with technology, but also that music heals the soul no matter what we’re going through,” said Reemaz Oqbi, international studies student, who is a member of the Arabic Music Ensemble. She sings and plays the flute.

The challenges did not stop her from pursuing her passion. “I’ve always loved performing and have found a home within Arabic Music Ensemble. I love it a lot, and even with the difficulty of distance learning and virtual work, I could not pass up a chance to be included in something so wonderful,” she said.

Katia Kanakri, an international studies student minoring in environmental policy and economics, is a singer in the AUS Choir and the Arabic Music Ensemble, as well as a solo vocalist.

“Two years ago, there was no way you would catch me singing in public. Ever since I joined the AUS Choir in 2019, I openly embraced my love for music. I encourage every shy music lover to do the same. It is life changing!” she said.

Kanakri added: “I wasn't going to let COVID-19 change that. The concert is one way I can continue to make music and sing with some amazing people, even if we are in different rooms, emirates or countries! We need music now more than ever.”